NEW YORK (FWAA) – The Football Writers Association of America, in conjunction with the Allstate Sugar Bowl, announced eight finalists for the 2017 Eddie Robinson Coach of the Year Award during a National Football Foundation news conference at the New York Hilton Midtown. 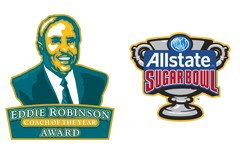 “We have an excellent group of finalists who stretch from the East Coast to the West Coast and represent a cross-section of conferences in the Football Bowl Subdivision,” the FWAA’s 2017 President Dave Jones said. “Some of these coaches will be competing for the College Football Playoff national title. Others represent remarkable building of programs and turnarounds.”

There are no previous “Eddie” winners in the group, and Swinney is the only previous finalist for one of college football’s most prestigious coaching awards. The winner will be announced on Thursday, Dec. 14.

“The Allstate Sugar Bowl is proud to have the opportunity to recognize the top college football coaches in the nation while at the same time honoring Louisiana legend Eddie Robinson,” said Stanley Cohn, President of the Sugar Bowl Committee. “We’re looking forward to presenting this prestigious trophy to the winner in Atlanta this January.”

The finalists were placed on a ballot which is being sent out to the entire FWAA membership this morning. Ballots will be accepted from the membership through 5 p.m. CT on Friday, December 8.

The official presentation reception will be on Jan. 6, 2018, in Atlanta where the winning coach will be handed the FWAA/Eddie Robinson Coach of the Year bust during a reception in conjunction with the College Football Playoff National Championship.

The FWAA has presented a coaching award since the 1957 season when Ohio State’s Woody Hayes was named the first recipient. The FWAA coaching award is named after the late Robinson, a coaching legend at Grambling State University for 55 seasons.

The 2017 Eddie Robinson Coach of the Year Finalists:

UAB’s Bill Clark: After the school’s two-year hiatus from football, Clark’s Blazers posted an 8-4 record during the 2017 regular season. Clark has built a roster from scratch and has recorded the most FBS victories in a UAB season. The Blazers beat four bowl-eligible teams, placed second in C-USA’s West Division at 6-2, and earned only the second bowl bid in program history, when they’ll take on Ohio in the Bahamas Bowl.

UCF’s Scott Frost: UCF (12-0) has its longest winning streak in program history heading into its Chick-fil-A Peach Bowl meeting against Auburn. The American Athletic Conference champions lead the nation in scoring (49.4 ppg) and are the only unbeaten team remaining in the FBS. Frost has accepted a job at his alma mater to coach the Nebraska Cornhuskers, but will coach UCF in Atlanta.

FAU’s Lane Kiffin: In his first season at the school, the well-traveled Kiffin led the Owls (10-3) to a win in the Conference USA Championship Game, as FAU became only the league’s second team to finish the regular season undefeated and win the title game. Kiffin led one of the best turnarounds in the FBS, as FAU was 3-9 year ago. The Owls, who have won nine straight games after a 1-3 start, will play Akron in the Cheribundi Tart Cherry Boca Raton Bowl.

Army’s Jeff Monken: Army stands at 8-3 before its meeting against Navy on Saturday in Philadelphia. The Black Knights, the nation’s top rushing team (368.1 ypg), will meet San Diego State in the Lockheed Martin Armed Forces Bowl. A year ago, the Black Knights broke a 14-game losing streak against Navy and have fed off that momentum in 2017. They were unbeaten at home (6-0) for the first time since 1996. The Black Knights lost two road games by a total of seven points.

Oklahoma’s Lincoln Riley: In his first season as a head coach, the nation’s youngest FBS head coach (34) has taken the Sooners to a 12-1 record and a berth in the College Football Playoff. With a Heisman Trophy finalist in quarterback in Baker Mayfield, the Sooners have one of college football’s most prolific offenses. The Sooners, No. 2 in the CFP’s final rankings, defeated TCU a second time this season in the Big 12 Championship and will face Georgia in the Rose Bowl.

Georgia’s Kirby Smart: The Southeastern Conference champion Bulldogs (12-1) were ranked No. 1 in the College Football Playoff rankings for the first time in school history – and stayed there for two weeks before finishing at No. 3, following their win over Auburn in the SEC Championship Game. The Bulldogs captured the SEC Eastern Division, including a perfect 6-0 in the division for the first time since the league split into divisions in 1992. Smart is in the second year as head coach at his alma mater.

Clemson’s Dabo Swinney: Coach of the defending national champions, Swinney has the Tigers in the College Football Playoff for the third straight year. The Atlantic Coast Conference champions (12-1) and top seed in the playoff will meet Alabama in the Allstate Sugar Bowl, a rematch of the last two national championship games. Swinney was a finalist for the Eddie Robinson Award in 2011 and ‘15.

Fresno State’s Jeff Tedford: In his first season at his alma mater, Tedford helped record the best turnaround in the FBS, as the Bulldogs finished 9-3 in the regular season after a 1-11 record in 2016. Fresno State won its division at 7-1 before falling to Boise State in the Mountain West Championship Game. Two of the Bulldogs’ three losses were to Alabama and Washington early in the season. Fresno State will meet Houston in the Hawaii Bowl.

The Allstate Sugar Bowl has established itself as one of the premier college football bowl games, having hosted 27 national champions, 92 Hall of Fame players, 48 Hall of Fame coaches and 17 Heisman Trophy winners in its 83-year history. The 84th Allstate Sugar Bowl Football Classic, which will double as a College Football Playoff Semifinal, will be played on January 1, 2018. In addition to football, the Sugar Bowl Committee annually invests over $1.6 million into the community through the hosting and sponsorship of sporting events, awards and clinics. Through these efforts, the organization supports and honors nearly 100,000 student-athletes each year, while injecting over $2.5 billion into the local economy in the last decade. For more information, visit AllstateSugarBowl.org.

The Eddie Robinson Award is a member of the National College Football Awards Association (NCFAA), which encompasses college football’s most prestigious awards. Founded in 1997, the NCFAA and its 24 awards now boast over 800 recipients, dating to 1935. Visit ncfaa.org to learn more about our story.