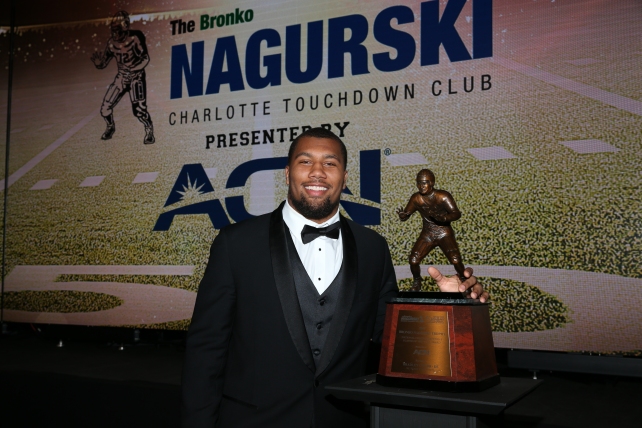 CHARLOTTE, N.C. (FWAA) – North Carolina State end Bradley Chubb was named the recipient of the 2017 Bronko Nagurski Trophy on Monday night before a sold-out banquet crowd of 1,200 people at the Charlotte Convention Center.

Chubb, a 6-4, 275-pound senior from Marietta, Ga., accepted the award given to the best defensive player in college football before a large contingent of Wolfpack supporters, including his head coach Dave Doeren.

“This is what happens if you just keep working,” Doeren said of Chubb’s record-setting career. “This wasn’t a guy who was a five-star (recruit). This is a guy who made himself into one.”

Chubb is the first Wolfpack player to receive the Football Writers Association of America’s National Defensive Player of the Year Award, which has been selected by the organization since 1993. He’s the fourth Atlantic Coast Conference player to win the award in the last eight seasons, including Boston College linebacker Luke Kuechly (2011), now a member of the NFL’s Carolina Panthers.

Chubb, second in the FBS in tackles for loss and eighth in sacks this season, claimed the award at the Charlotte Touchdown Club banquet sponsored by ACN. He was chosen over four other finalists: Alabama safety Minkah Fitzpatrick, Iowa linebacker Josey Jewell, Houston tackle Ed Oliver and Georgia linebacker Roquan Smith.

“He’s the real deal, man,” Clemson head coach Dabo Swinney said during the 2017 season. “He’s long. He’s fast. He’s explosive. He plays with excellent technique. He’s a very knowledgeable, instinctive player. This guy has all the little nuances down. He understands what you are trying to do offensively, so that allows him to anticipate. When you have that type of speed and skill and strength, plus knowledge, you are a tough guy to handle.”

Chubb, who is the ACC’s 2017 Defensive Player of the Year, set North Carolina State career records for tackles for loss (60) and sacks (26). Those marks are tied for fourth and tied for 18th, respectively, in ACC history.

“He’s a dynamic player,” Boston College head coach Steve Addazio said. “He’s as good as there is in America without any doubt.”

A three-time ACC Defensive Lineman of the Week (vs. Florida State, Syracuse and Boston College), Chubb played 87 percent of the snaps against ACC competition this season.

“He’s a very strong, very twitchy, explosive player that makes plays throughout the game and does a lot, whether he’s rushing the passer or he’s squeezing the run or he’s dropping into coverage,” North Carolina head coach Larry Fedora said before the Wolfpack beat his team. “You’ve always got to be aware of where he is. He’s going to make plays and you’ve got to do everything that you can in your scheme to make sure that he doesn’t single-handedly beat you.”

In addition to the 2017 Bronko Nagurski Trophy winner’s announcement, the banquet Monday night celebrated the recipient of the Bronko Nagurski Legends Award, sponsored by the CTC and Florida East Coast Railway.

Notre Dame’s Ross Browner, a member of the FWAA’s 1976 and ‘77 All-America teams, winner of the 1976 Outland Trophy and a member of the College Football Hall of Fame, was this year’s Legends Award recipient.

Bound for the College Football Playoff, Georgia head coach Kirby Smart was the keynote speaker at the banquet.

The FWAA has chosen a National Defensive Player of the Year since 1993. In 1995, the FWAA joined with the CTC and named the award in honor of the legendary two-way player from the University of Minnesota. Nagurski dominated college football then became a star for professional football’s Chicago Bears in the 1930s. Bronislaw “Bronko” Nagurski is a charter member of both the College Football and Pro Football Halls of Fame.

The Bronko Nagurski Trophy is a member of the National College Football Awards Association (NCFAA), which encompasses college football’s most prestigious awards. Founded in 1997, the NCFAA and its 24 awards now boast over 800 recipients, dating to 1935. Visit ncfaa.org to learn more about our story.

ABOUT THE CHARLOTTE TOUCHDOWN CLUB AND ITS SPONSORS

The Charlotte Touchdown Club is a non-profit organization founded in 1991 for the purpose of promoting high school, collegiate, and professional football in the Charlotte, N.C., region. The club’s activities and services focus community attention on the outstanding citizenship, scholarship, sportsmanship, and leadership of area athletes and coaches. Since 1991, the club has raised more than $2,000,000 to benefit area high school and collegiate athletics. For more information, contact John Rocco (704-347-2918 or jrocco@touchdownclub.com). The official website of the Charlotte Touchdown Club is touchdownclub.com.

Florida East Coast Railway
FECR is a regional freight railroad that extends along a 351-mile corridor between Jacksonville, Fla., and Miami, Fla., with exclusive rail access to the Port of Palm Beach, Port Everglades (Ft. Lauderdale) and the Port of Miami. For more information, visit fecrwy.com.

Electrolux
Electrolux is a global leader in appliances for household and professional use, selling more than 50 million products to customers in more than 150 countries every year. The company focuses on innovations that are thoughtfully designed, based on extensive consumer insight, to meet the real needs of consumers and professionals. Electrolux products include refrigerators, dishwashers, washing machines, vacuum cleaners, cookers and air-conditioners sold under esteemed brands such as Electrolux, Frigidaire, Kelvinator, AEG, and Eureka. In 2012, Electrolux had sales of $17 billion ($5.1 billion in North America) and 58,000 employees. The Electrolux North American headquarters is located at 10200 David Taylor Drive, Charlotte, NC 28262 in the University Research Park. For more information visit http://newsroom.electrolux.com/us/.