The following is the 18th installment of the Pillars of the FWAA series. Jim Brock was the 1989 winner of the Bert McGrane Award. Thanks to FWAA member Gene Duffey for writing and researching this sketch.

Several reporters were attempting to gain access to the Olympic Village at the 1976 Summer Games in Montreal. Because of the massacre at the 1972 Games in Munich, security was extremely tight. 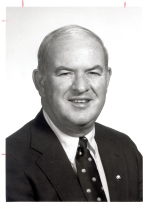 One of the reporters finally got hold of Jim Brock, one of the press stewards for the American delegation, who could approve entrance to the Village.

“I’m burning my feet in that direction right now, Hoss,” replied Brock. The line became the most repeated of any among the media covering the Games and Brock became as popular as U.S. boxer Sugar Ray Leonard and high jumper Dwight Stones for his unlimited cooperation.

You couldn’t help but have a good team if you were around Jim Brock. If he had been an actor he would have been perfect for movies like “The Sting” or “Eight Men Out,” wearing a black bowler hat and handling an unlit cigar.

The name “Hoss” became Brock’s trademark. He called nearly everyone “Hoss.” He never had to worry about forgetting anyone’s name. And if the guy’s wife was along, she was usually “Darlin’ ” to Brock. Even though he knew thousands of “Hosses,” the way Brock said it made every one of them feel special.