The National Football Foundation has decided this year to provide each FWAA member a complimentary ballot for the 2020 College Football Hall of Fame Class, encouraging you to vote and then write about your selections. Please vote and share your perspective with your readers. Ballots must be submitted by June 21. 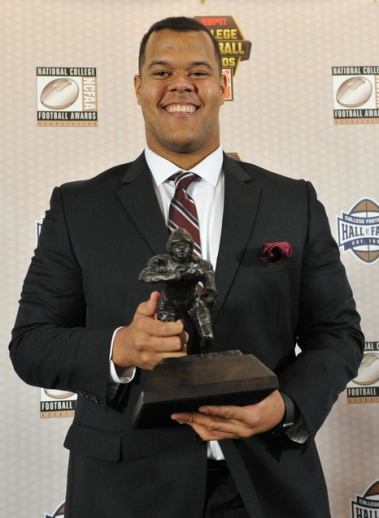 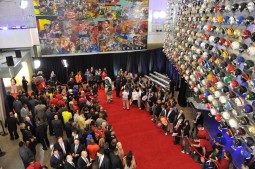 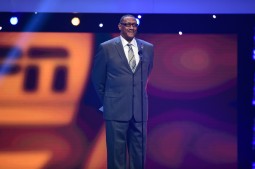 A’Shawn Robinson of the University of Alabama sits down for an interview before the College Football Awards Show in Atlanta. (Photo by Phil Ellsworth / ESPN Images)

Spencer Drango of Baylor sits for an interview before the College Football Awards Show in Atlanta. (Photo by Phil Ellsworth / ESPN Images)

Stanford’s Joshua Garnett fielded questions from the media before being named the 2015 Outland Trophy winner at the College Football Hall of Fame. (Photo by Phil Ellsworth / ESPN Images) 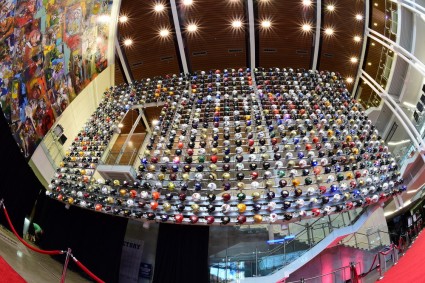 The main entrance to the College Football Hall of Fame in Atlanta. (Photo by Phil Ellsworth / ESPN Images)

ATLANTA – Beginning in 2015, each year’s college football stars will be honored at the home of the game’s greatest legends as The Home Depot College Football Awards will move to the College Football Hall of Fame and Chick-fil-A Fan Experience in downtown Atlanta as part of a new multi-year agreement between ESPN and the Hall of Fame.  Airing live on ESPN on December 10, 2015, The Home Depot College Football Awards will feature the presentation of nine of the most prestigious accolades in college football and pay tribute to the remarkable successes of each year’s standout student-athletes both on and off the field.  The 45-yard-long indoor football field at the new 94,000-square-foot attraction doubles as a fully-functioning event facility and will serve as the show’s new home.

“Disney gave us a wonderful home for The Home Depot College Football Awards for more than two decades. Now, the National Football Foundation and the College Football Hall of Fame will provide us the opportunity to enhance both our coverage and the experience for attendees and fans. The show and this new venue are not only a natural fit, but a great way to mark 25 years of ESPN televising the awards,” said Burke Magnus, ESPN senior vice president, programming and acquisitions.

“The Home Depot College Football Awards celebrates exceptional student-athletes, and there’s no more fitting venue for this prestigious ceremony than at our spectacular new facility, which celebrates college football every day,” said John Stephenson, president & CEO of the College Football Hall of Fame.  “The Hall of Fame was designed, built and wired for premier broadcast events like this, and we will honor this decision to move the show by providing exceptional hospitality and a celebratory experience to the players, their families, coaches and fans.”

END_OF_DOCUMENT_TOKEN_TO_BE_REPLACED

The National Football Foundation and College Football Hall of Fame officially dedicated its new home in downtown Atlanta on Oct. 7 when it enshrined the newest class of Hall of Famers at the state-of-the-art attraction.

The Football Writers Association of America is well represented in the $68.5  million,  94,256 square-foot facility, which houses 520 artifacts, numerous interactive exhibits, a 4K theater, a 45-yard indoor football field, a wall of the helmets of the 767 four-year schools playing college football and much, much more.

Two of the FWAA’s biggest awards, the Outland Trophy (best interior lineman in college football) and the Eddie Robinson Coach of the Year Bust, are among the six player/coach awards that are physically represented in the new Atlanta Hall by their the actual trophies.

There also is a picture of the FWAA’s 2009 Bert McGrane Award winner, Atlanta’s Tony Barnhart, and a description of the award and former winners.

The FWAA’s Bert McGrane Award, presented since 1974 and symbolic of the association’s Hall of Fame, goes annually to an FWAA member who has performed great service to the organization and/or the writing profession. It is named after McGrane, a Des Moines, Iowa, writer who was the executive secretary of the FWAA from the early 1940s until 1973.

The new Hall is in the heart of Atlanta’s tourism and sports entertainment district,   across the street from the Centennial Olympic Park and adjacent to the Omni Hotel, Georgia World Congress Center, CNN Center and Georgia Dome.  The World of Coca-Cola, the Georgia Aquarium and the National Center for Civil and Human Rights are nearby.

“Today represents the culmination of an enormous amount of work by countless individuals, and we could not be more pleased with the result,” NFF Chairman Archie Manning, a 1989 inductee into the Hall, said at the Oct. 7 proceedings. “The new Hall simply is a spectacular tribute to college football and why it matters. It provides the entire college football community a powerful platform for promoting everything that is right with our great sport.”

NFF President and CEO Steve Hatchell said: “We are extremely grateful to Atlanta and all of those who have played a role in making this project a reality.”