The National Football Foundation and College Football Hall of Fame officially dedicated its new home in downtown Atlanta on Oct. 7 when it enshrined the newest class of Hall of Famers at the state-of-the-art attraction.

The Football Writers Association of America is well represented in the $68.5  million,  94,256 square-foot facility, which houses 520 artifacts, numerous interactive exhibits, a 4K theater, a 45-yard indoor football field, a wall of the helmets of the 767 four-year schools playing college football and much, much more.

Two of the FWAA’s biggest awards, the Outland Trophy (best interior lineman in college football) and the Eddie Robinson Coach of the Year Bust, are among the six player/coach awards that are physically represented in the new Atlanta Hall by their the actual trophies.

There also is a picture of the FWAA’s 2009 Bert McGrane Award winner, Atlanta’s Tony Barnhart, and a description of the award and former winners.

The FWAA’s Bert McGrane Award, presented since 1974 and symbolic of the association’s Hall of Fame, goes annually to an FWAA member who has performed great service to the organization and/or the writing profession. It is named after McGrane, a Des Moines, Iowa, writer who was the executive secretary of the FWAA from the early 1940s until 1973.

The new Hall is in the heart of Atlanta’s tourism and sports entertainment district,   across the street from the Centennial Olympic Park and adjacent to the Omni Hotel, Georgia World Congress Center, CNN Center and Georgia Dome.  The World of Coca-Cola, the Georgia Aquarium and the National Center for Civil and Human Rights are nearby.

“Today represents the culmination of an enormous amount of work by countless individuals, and we could not be more pleased with the result,” NFF Chairman Archie Manning, a 1989 inductee into the Hall, said at the Oct. 7 proceedings. “The new Hall simply is a spectacular tribute to college football and why it matters. It provides the entire college football community a powerful platform for promoting everything that is right with our great sport.”

NFF President and CEO Steve Hatchell said: “We are extremely grateful to Atlanta and all of those who have played a role in making this project a reality.” 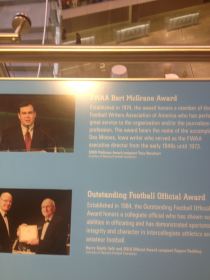 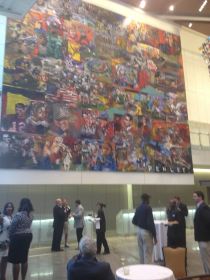