Shaun Alexander knows what it’s like to have a breakout performance on a football field.

On a November 1996 Saturday night in a 26-0 win at LSU, Alexander went from a barely-used third-string Alabama freshman redshirt running back to recording the most yards rushing in a game in Crimson Tide history.

His incredible numbers – 291 yards and four touchdowns on 20 carries – have remained as the gold standard in Tuscaloosa, Ala. No running back in SEC history has rushed for more yards in one half than Alexander’s 274 yards on 19 carries in the second half against an LSU defense that held many offenses down in that 1996 season.

“After I scored the second TD,” Alexander recalled, “I told our fourth-string running back Montoya (Madden) that `I feel like I’m about to be in a zone.’ It’s a feeling I got in high school, college and in the pros when I felt I could score every time I touched the ball.” 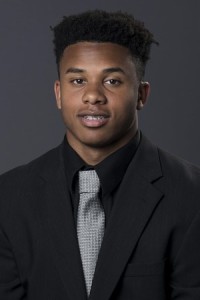 Six times this year in Moore’s fabulous first season, he had 11 or more catches as he finished with an FBS-leading 114 catches for 1,258 yards and 12 touchdowns. He also set a school season record with 2,215 all-purpose yards, was named a consensus first-team All-Big Ten and All-American and won the Paul Hornung Award as college football’s most versatile player.

His biggest show came on the brightest stage. The 5-9, 180-pound Moore caught 12 passes for 141 yards and two touchdowns in Purdue’s stunning 49-20 beatdown of then-No. 2 and eventual Big Ten champion Ohio State on Oct. 20.

Add Moore’s two rushes for 24 yards, three kickoff returns for 49 yards and one punt return for 9 yards against the Buckeyes and it’s enough to be named as the FWAA’s first Shaun Alexander Freshman Breakout Performance of the Year.

“I saw most of the Ohio State game,” Iowa coach Kirk Ferentz said, “and the way he (Moore) played against that type of competition was unusual. It would have been impressive for a senior. But to consider him being just out of high school, it’s awfully impressive.”

“I saw Moore’s first catch of the game and asked myself `Is he electric?’” Alexander said. “Then, as the game went on, he kept answering the question with a `Yes.’ It was special to see a freshman put in work like that.”

Admittedly, Alexander and Moore took different paths to grabbing the national spotlight for the first time.

In his senior season at Boone County (Ky.) High School in 1994, Alexander scored a mind-blowing 54 touchdowns, including 50 rushing scores. Yet when he reported to Alabama for the first time in the fall of 1995, he understood his place on the depth chart behind Dennis Riddle and Curtis Alexander (no relation to Shaun).

“I was still 17 years old when I reported and there were grown men there,” he said. “I still thought I was better than most of the guys. I felt like I was going to be good.

“But I didn’t feel like I felt in high school, which was when I walked on the field, I was going to take the game over. I didn’t want to be just a good player, I wanted to dominate. My desire to totally take the will out of the other team is the thing that drove me. I wanted to play at that level in college like I did in high school.”

Alexander was totally in agreement with then-Alabama coach Gene Stallings to redshirt him as a true freshman.

“You get to fine tune your game,” Alexander said when he considered the positives of being redshirted. “You get to learn the ebbs and flows of defense and how they scheme. I had the ability to look at the big master plan and say `OK, I can get there.’”

Even the next season in 1996 when he finally got chances to play, the moments were fleeting. Stallings, in the final season of his storied 39-year coaching career, was old school and simply didn’t believe most true freshmen or redshirt freshmen should get anything more than token minutes here and there.

But times have changed.

Now, when a college head coach such as Purdue’s Jeff Brohm lands a talent like Moore, the state of Kentucky’s 2017 Gatorade Player of the Year at Louisville’s Trinity High, you give him an immediate shot at playing time.

Moore didn’t disappoint. Starting with a school-record 313 all-purpose yards in the season-opener against Northwestern, Moore quickly became a weapon just as Brohm expected.

“He came into camp with us and from day one, he’s been making plays, taking every rep,” Brohm said of Moore. “He’s been dynamic and exceptional. He’s a difference maker. He brings it every game.”

Because Moore works with the same intensity every day and has adapted flawlessly to drawing more attention, on and off the field.

“I put in the work and my teammates have done a great job around me,” Moore told the Big Ten Conference network. “When you play at a certain level, you get more and more people who look up to you and pattern their life after you. You have to grow up and do things the right way.”

All of Moore’s physical attributes – his 4.33 40-yard speed and his incredible leg strength that allows him to squat 600 pounds – were on display against Ohio State.

Purdue was 3-3 after an 0-3 start when they welcomed the 7-0 Buckeyes and proceeded with a 29-point win that eventually played a major factor in keeping Ohio State out of the College Football Playoff.

On the Boilermakers’ first offensive play, the one that caught Alexander’s eye, Moore received a short pass and made four Ohio State tackles miss for a 23-yard gain. Moore’s last catch of the day was a 43-yard fourth-quarter touchdown in which he shook off a tackler that appeared to have him stopped near the sideline.

Moore had seven catches for 90 yards in the first half including a 9-yard touchdown with 27 seconds left before halftime for a momentum-grabbing 14-3 lead at the break. He added five receptions for 80 yards and a touchdown in the second half.

He celebrated the win by staying awake until 3 a.m. before the game tape was e-mailed to him so he could watch it and grade himself.

Moore also had 12 catches for 141 yards and two touchdowns in a regular-season ending win over Indiana that gave Purdue six wins and a bowl bid.

Moore cited Ohio State and Indiana as his biggest games of the year.

“The Indiana game meant a lot to me personally,” Moore said, “because it gave our seniors a chance to play one more game in a bowl.”

Before the Music City Bowl, Auburn coach Gus Malzahn called Moore “one of best players in college football.” Moore was one of the bright spots in his team’s loss to the Tigers when he had 11 receptions for 94 yards and scored one of the Boilermakers’ two touchdowns on a seven-yard run.

As great a season as Moore experienced, he understands it’s only the beginning.

“There are a lot of areas I can improve,” Moore said. “Blocking is something I’ll focus on this spring and in the summer. Also, with a year of experience under my belt, I have to take on more of a leadership role.”