When he was 10, Martinez’s mother Deanna died from cancer. 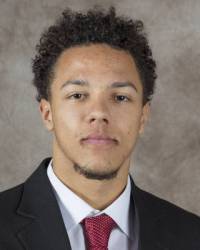 “It forced me to grow up a little sooner, just to realize how real the world can really get sometimes,” Martinez told the Big Ten Network earlier this season. “I had to get back up and fight.”

When he sat out last season as a senior at Fresno (Ca.) Clovis West High recovering a torn labrum he sustained late during his junior football season, he served as player-coach tutoring the younger quarterbacks.

“As good of an athlete as he is, he’s an even better person,” Clovis West coach George Petrissans said of Martinez.

When Martinez exited this year’s Nebraska’s season opener against Colorado after suffering a knee injury while posting 304 yards total offense and three TDs in his college debut, Cornhusker Nation gulped.

Martinez didn’t blink. Two weeks later, he was back in the lineup, and on his way to completing a season that ranks as one of the most spectacular debuts in Big Ten history.

For consistently overcoming adversity, Martinez has been named the FWAA’s first Shaun Alexander Inspirational Freshman of the Year Award.

“My sophomore season at Alabama, I had a mid-foot sprain which basically I dislocated my foot,” said Alexander, the Crimson Tide’s second all-time leading rusher from 1996 to 1999 who later went on to a phenomenal nine-year NFL career. “I hardly played, we went 4-7 and I was getting verbal jabs wondering if I had been lucky as a freshman or maybe I had a sophomore slump.

“I got knocked down as a sophomore, but as a junior I was going to be the starter. I had the keys to the car. The first carry was coming to me. I scored five touchdowns in the (1998) season opener (against Brigham Young) in my first start.

“It’s why I always wanted to inspire people to get up if you’ve been knocked down. That’s why I like this Martinez kid. He got knocked down and he got up.”

Martinez, who averaged 237.9 passing yards and 57.2 yards rushing, became just the sixth freshman FBS quarterback since 1990 to average 200 passing and 50 rushing yards. That prestigious group has a pair of Heisman Trophy winners, including Marcus Mariota.

It was a comparison to Mariota that first brought Martinez to the attention of then-Central Florida head coach Scott Frost and quarterbacks coach Mario Verduzco. As Oregon’s offensive coordinator/quarterbacks coach, Frost had coached Mariota when he won the 2014 Heisman.

“I just had this notion in my mind that he just reminded me of Marcus Mariota,” Verduzco said earlier this year after he recalled watching just a handful of plays of Martinez’s high school game film.

Martinez was the top QB on the recruiting board for Frost and Verduzco at UCF. When Frost was announced as Nebraska’s new coach last December, his first call was to Martinez who had verbally committed to Tennessee.

Even while Frost was preparing UCF for its bowl game, he flew cross-country to visit Martinez. One of the things that swayed Martinez to break his Tennessee commitment was Frost’s loyalty to stay and coach UCF for the bowl game.

“It speaks volumes that he’s going out to coach the bowl game,” said Martinez before signing with Nebraska last Dec. 20 and enrolling last January “He’s going to finish it out with his players. That’s a big deal. That definitely impressed me. It showed me he wouldn’t give up on his players, that he wasn’t selfish. He’s demonstrated a lot of great things throughout this process in making the transition to Nebraska. It speaks to his character.”

Though Martinez ran for 60 yards and three TDs on 14 carries in the Huskers’ spring game, he wasn’t named starter until late in fall camp. He was the first true freshman quarterback in Nebraska’s storied football history to start a season opener.

“At the end of the day we’re more dangerous if we have a quarterback that’s also a threat to run,” Frost said of Martinez as the season progressed. “I’m always careful about making comparisons, but he’s doing some things like quite a few of the special guys I’ve been around. There’s no way I would have been ready to do what he’s doing right now as an 18-year-old. It says a lot about who he is as a person.”

In a tough rebuilding year for Nebraska as the Huskers finished 4-8 overall and 3-6 in Big Ten play, Martinez gave Nebraska fans hope for the future.

In Frost’s no-huddle spread-option offense, Martinez had a school-record seven 300-yard total offense games and threw for more than 260 yards in seven league contests. He led Nebraska to at least 450 total offense yards in seven straight games, the longest streak in school history.

One of his most impressive stats was completing 24-of-26 passes for 269 yards and three TDs in leading Nebraska to TDs on seven game-opening drives.

“He’s one of the better players in the country already,” Minnesota coach P.J. Fleck said of Martinez. “He’s a running back that’s an incredible quarterback. He’s so fast, he’s so quick, he’s bigger than you think, and he can hurt you.”

Frost believes Martrinez’s best attribute is his desire to not be satisfied with status quo.

Martinez’s patience and maturity, far beyond his years, should continue to serve him well.

“Just the experience I’ve gained throughout this process I think has really helped,” Martinez said. “Just different situations and growing with my teammates and coaches. Really, to point back to the great people I’m around it really just helped me progress to this point.

“I still feel like I haven’t scratched the surface.”