The Football Writers Association of America is celebrating its 75th anniversary in 2015. Founded in 1941, the FWAA has served the writing profession and college football during a time when the world has changed greatly and the sport of football has along with it. In an effort to tell the stories of the members of the organization, we will publish sketches of the FWAA’s most important leaders — all Bert McGrane Award winners.

The following is the 23rd installment of the Pillars of the FWAA series. Orville Henry was the 2002 winner of the Bert McGrane Award. Thanks to FWAA member Gene Duffey for writing and researching this sketch.

Even the toughest of times seemed to work out the best for Orville Henry.

With World War II raging in Europe and the Pacific, and many newspapermen serving overseas, Henry was named sports editor of the Arkansas Gazette in October 1943 at age 18 for the sum of $32 a week. 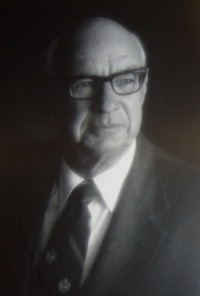 Butch Henry, the oldest of Orville’s four sons, said his father suffered from a stomach deficiency that made him 4F, ineligible to serve in the military. Orville couldn’t eat regular bread or gluten.

Orville grew up on the edge of Little Rock, the fourth of nine children and the son of a traveling salesman. He began working for the school paper in ninth grade at Pulaski Heights Junior High. His school ran a program that allowed students to volunteer at the Gazette. He finished high school at 16 in January 1942 and went to work as a copy boy at the Gazette, filling in at the switchboard.

Henry worked at the newspaper full time while continuing his education at Little Rock Junior College, which is now Arkansas-Little Rock. He graduated from the junior college at 18.

Butch remembered his father coming home for dinner, then returning to the office to put out the next morning’s newspaper, often not getting home again until 2 a.m. But Orville was up at 7, cooking breakfast for his four boys, often his special apple pancakes.

When the Little Rock schools attempted to integrate in 1957, it became national news. The racist reaction from white parents and their kids toward the black children made President Dwight D. Eisenhower send in the National Guard. Indirectly it led to Henry becoming the best known sports writer all across the state.

Editorially the Gazette supported integration, an unpopular position with many of its readers. “Because of that, circulation and advertising revenue (at the Gazette) dwindled drastically,” said Butch Henry. “My father went to management and said we’ve got to cover the Razorbacks like no one else. He knew the Razorbacks were the only thing that could unite the state.”

Management agreed with Orville and began running his stories from Arkansas football games on page 1A. “He wrote reams and reams of copy,” said Butch.

“He did more than anybody to make the Razorbacks, including Frank Broyles,” said Wally Hall, the 2003 FWAA President who worked against and later with Henry for years. “He was renowned for his 100-inch game stories and 100-inch follow-ups in an era when few games were on TV. He took (Arkansas) into everybody’s home.”

“When they hired Frank Broyles as (football) coach in ’58, Broyles recognized the importance of the Gazette in his recruiting and promotion,” said Butch. “He and my father became close professional friends. When Eddie Sutton arrived in ’75 (to coach basketball), he started covering Arkansas basketball the same way. He anointed Arkansas basketball and they started selling out.”

Henry developed a reputation for favoring the Razorbacks.

“He was not immune to criticizing them in print,” said Butch. “He would sit down with them face-to-face and give them the opportunity to respond. The coaches respected him for that. In most cases they would respond how (they would correct) the problem.”

Henry became president of the FWAA in 1981.

The Arkansas Democrat, the afternoon newspaper in Little Rock, switched from a P.M. cycle to A.M., going head-to-head with the Gazette.

Hall began making a name for himself as sports editor and columnist at the Democrat. “Wally was a younger, more volatile writer,” said Butch, comparing him with his father. “They did things completely different.”

“We were huge competitors in a newspaper war,” said Hall.

Gannett, a bottom line newspaper chain, bought the Gazette and began cutting back on space. In August 1989, after 46 years as sports editor of the Gazette, Henry left to join the Democrat. His switching papers was a major story in the state.

“They didn’t have the respect they should have for him and several people who were institutions at (the Gazette),” said Hall, who was asked by the publisher about Henry joining the Democrat. “He had been the oracle of the Ozarks for 50 years. He gave us credibility that we weren’t going anywhere.”

But the Gazette went somewhere, out of business five years later.

Henry looked ill covering Arkansas in January 2000 at the Cotton Bowl. He underwent gall bladder surgery and fought pancreatic cancer for a couple of years.

He cut back his columns from four a week to two, but he never retired. Orville became the first media person to be inducted into the Arkansas Sports Hall of Fame in 2001.