DALLAS – Kirk Ferentz, whose Iowa Hawkeyes won 12 games in a season for the first time in school history, has been named the first University of Iowa coach to win the 59th FWAA/Eddie Robinson Coach of the Year Award, it was announced on Wednesday by the Football Writers Association of America.

Presented for a second straight year by the Allstate Sugar Bowl, the FWAA/Eddie Robinson Coach of the Year Award honors the top coach in the Football Bowl Subdivision as selected by the membership of the 75-year-old organization.

“It is rewarding to see the hard work of our entire coaching staff and every member of our football program being recognized on the national level,” Ferentz said. “I appreciate the acknowledgement of our accomplishments. I am honored to share this recognition with our staff, our players, and our great fans, and I am grateful to the University of Iowa for providing the necessary support for our success.”

Ferentz’s team had a 7-6 record in 2014 and was selected fourth in a preseason 2015 Big Ten West Division media poll. But the Hawkeyes won their first 12 games in 2015 before falling to Michigan State, 16-13, in the Big Ten championship game. For the first time since the 1990 season, the Hawkeyes will play in the Rose Bowl and face Pac-12 champion Stanford.

The FWAA/Eddie Robinson Coach of the Year Award will be highlighted during a reception on Jan. 9, 2016, at the JW Marriott Scottsdale Camelback Inn Resort and Spa. Ferentz will accept the Eddie Robinson Award bust at the College Football Playoff National Championship media hotel.

Ferentz, 60, is in his 17th year at Iowa and has a 127-86 overall record in Iowa City. The dean of the current Big Ten coaches trails only Hayden Fry in terms of longevity as the Iowa head football coach. He has guided Iowa to 13 bowl games in 17 seasons.

Ferentz has twice before been a finalist for the FWAA coaching award, in 2002 and ’04. But the last Big Ten Conference coach to win it was Ohio State’s Jim Tressel in 2002, the year the Buckeyes won the national championship in the Fiesta Bowl with an overtime victory over Miami. 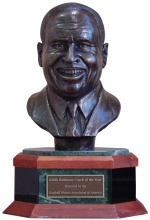 What they are saying about Coach Ferentz:

“On behalf of the Eddie Robinson family, I want to extend congratulations to coach Kirk Ferentz, his family and the Iowa Hawkeyes’ football program on him becoming the 2015 Eddie Robinson Award winner,” said Eddie Robinson III. “This is so special to me because my grandfather, coach Eddie Robinson, was an Iowa Hawkeye (obtaining a master’s degree from the school). Coach Ferentz is well deserving of this award and is an institution at Iowa.”

“Kirk Ferentz’s Hawkeyes, in a preseason poll of writers compiled by cleveland.com, were picked to finish fourth in the seven-team Big Ten West Division,” said 2015 FWAA President Lee Barfknecht of the Omaha World-Herald. “They garnered zero first-place votes. By the end of the regular season, Iowa was 12-0, ranked nationally in the Top 5 and was the undisputed West champion. Ferentz’s success in retooling his program after a 7-6 season has earned him the FWAA’s national coaching honor.”

“The Sugar Bowl Committee is pleased to recognize Coach Ferentz for the outstanding job he did with Iowa this year,” said T. Carey Wicker, III, President of the Allstate Sugar Bowl. “While leading the Hawkeyes to a perfect regular season and their first Rose Bowl since 1991, Coach Ferentz has exhibited many of the same great characteristics for which Eddie Robinson was known over his lifetime in coaching. All of us here look forward to joining the Football Writers in honoring Coach Ferentz with this great award next month in Arizona.”

The FWAA has honored a major college coach with its Coach of the Year Award since 1957 when Ohio State’s Woody Hayes won the inaugural honor. Robinson, a coaching legend at Grambling State University, has been the FWAA’s coaching namesake since 1997.

The late Robinson is the second winningest coach in Division I football history (408 games). Robinson, who passed away on April 3, 2007, won 70.7 percent of his games during his illustrious career. Robinson’s teams won or tied for 17 Southwestern Athletic Conference (SWAC) championships after joining the league in 1959. His Tigers claimed nine Black College Football Championships during his career spent all at the same school.

Robinson, who was named by the FWAA in 1966 as “The Coach Who Made the Biggest Contribution to College Football in the Past 25 Years,” took his show often on the road to places such as the Louisiana Superdome, the Cotton Bowl, the Astrodome, Tiger Stadium and Yankee Stadium. And with his star-studded array of players, Robinson helped integrate professional football.

Celebrating its 75th season, the Football Writers Association of America, a non-profit organization, consists of more than 1,400 men and women who cover college football. The membership includes journalists, broadcasters and publicists, as well as key executives in all the areas that involve the game. The FWAA works to govern areas that include game-day operations, major awards and its annual All-America team. For more information about the FWAA and its award programs, contact Steve Richardson at tiger@fwaa.com or 214-870-6516.

The Allstate Sugar Bowl has established itself as one of the premier college football bowl games, having hosted 27 national champions, 86 Hall of Fame players, 47 Hall of Fame coaches and 16 Heisman Trophy winners in its 81-year history. The 82nd Allstate Sugar Bowl Football Classic, featuring Oklahoma State from the Big 12 and Ole Miss from the SEC, will be played on January 1, 2016. In addition to football, the Sugar Bowl Committee is involved with various community initiatives through hosting and sponsorships of sporting events, awards and clinics. Through these efforts, the organization supports and honors over 25,000 student-athletes each year, while injecting over $2 billion into the local economy in the last decade. For more information, visit AllstateSugarBowl.org.

The FWAA/Eddie Robinson Coach of the Year Award is a member of the National College Football Awards Association (NCFAA). The NCFAA encompasses the most prestigious awards in college football. The 22 awards boast more than 700 years of tradition-selection excellence. Visit ncfaa.org to learn more about our story.