GRAPEVINE — Got your back, Mack.

And got your Longhorns in the playoffs. Better late than never, right?

Sure, it’s six years too late, and it’s only fictional like all those mythical national championships the last hundred years. At least, until the real College Football Playoff committee convenes.

FWAA President Kirk Bohls at the mock selection meeting for a College Football Playoff Final Four based on the 2008 season.

On Thursday, some of us pushed revisionist history on college football and voted Texas into the first four-team playoff. If a playoff existed then, Mack Brown’s Longhorns would have joined Oklahoma, according to a mock exercise by a 17-member media selection committee that was asked to evaluate the 2008 season and pick the best four teams in America.

The most spirited debate of the day revolved around the Longhorns’ worthiness in the Final Four. ESPN’s Rod Gilmore and Holly Rowe strongly criticized Texas’s non-conference schedule that included Rice, UTEP and Florida Atlantic but also Arkansas and omitted the Longhorns from their final four. Rowe asked, “Is Florida Atlantic a worthy opponent?” Responded Andy Staples of Sports Illustrated, “Oklahoma was, and Texas beat them on a neutral field.”

In our mythical playoff, No. 3 Texas would face No. 2 Oklahoma in a Rose Bowl semifinal, a rematch of that Cotton Bowl Classic in which the Longhorns came back from an 11-point deficit to win 45-35. Florida, our No. 1 team and the national champion that year, would play Southern Cal in the Sugar Bowl in the other semifinal.

I joined such media luminaries as Tony Barnhart, Jerry Palm and Staples, who was chosen as our bow-tied chairman and ran our six-hour panel discussion. We began by compiling a collective Top 25 and 34 teams received votes. We voted our top four three times, and it never varied. Jeff Long, the chairman of the real CFP panel, said his committee spit out a different four teams from 2008 but declined to reveal them. Then, we added to the field in small pods in complicated comparisons until we finalized our top 25 and then placed our teams in the Orange, Cotton, Fiesta and Peach bowls.

We sorted out teams in the Big 12 three-team tie-breaker and eventually chose Texas and OU because, well, the Big 12 South then was the SEC West now.

While we learned a lot, so did Long, the affable Arkansas athletic director, who took copious notes as we gathered in the same high-tech Bluebonnet Room quarters of the Gaylord Texan Resort where the 13 members will meet later this month to begin deliberations that will culminate in a historic playoff field.

We had the extra hardship of working off 2008 memories whereas the Condi Rices and Archie Mannings will have a fresh outlook on this season.

“This has been very helpful,” said Long, who estimates that he has already watched well over 100 college football games.

For his part, Long was encouraged by the lively debate and the diversity of strong opinions shared in the room. At one point, we each shared our most important criteria. 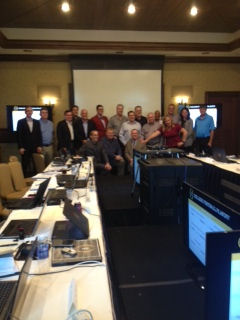 Seventeen members of the media participated in the mock CFP Final Four selection meeting, based on the 2008 season.

Gilmore is also big on out-of-conference scheduling and league championships, and Rowe echoed that. The Fort Worth Star-Telegram’s Jimmy Burch mentioned “the eyeball test.” Pat Forde at Yahoo.com said, “I look at who’d they beat, how and where.” Matt Hayes of The Sporting News emphasizes road results.

The debate really became spirited when Texas-based writers like Chuck Carlton of The Dallas Morning News, Burch and I trumpeted the Longhorns. Since Los Angeles Times writer Chris Dufresne and I had to share the role of USC athletic director Pat Haden, we were forced to recuse ourselves so often from the voting because the Trojans were involved that we could have played Monopoly in the outer room. Actually, we were mock-recused. We stayed in the room but couldn’t vote in any ballot that included USC.

Of course, Palm summed it up the best.

Yep, I’d say this was realistic.