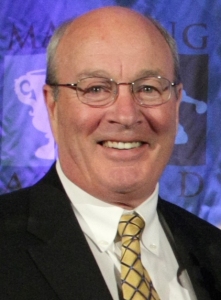 Hoolahan will be honored at the FWAA’s Annual Awards Breakfast on Jan. 13 in New Orleans at the Sheraton New Orleans, the Media Hotel in conjunction with the College Football Playoff National Championship Game.

Hoolahan, who retired from his post before the 2019 football season, had been the bowl’s leader since the mid-1990s, running 25 Sugar Bowls from his position. During that time, the FWAA has held five of its annual meetings during national title games under Hoolahan’s watch at the Sugar Bowl.

“I am very honored to receive this recognition from the Football Writers,” Hoolahan said. “The writers and other media play a critical role in the world of college football and during my years at the Sugar Bowl, we recognized their importance. It means a lot to me for this group to take the time to recognize me. I’d also like to congratulate my longtime friend Wright Waters who is also being recognized.”

Hoolahan, a former All-ACC lineman at North Carolina and later athletic director at Vanderbilt, has led the Sugar Bowl during a period of growth and excellence in which it has remained one of the top bowls despite changes in the post-season structure during the last 25 years.

Not only has the Sugar Bowl remained in the national title rotation, Hoolahan has directed “organizational efforts” which have generated well over $3 billion for the New Orleans economy. Hoolahan was inducted into Louisiana Sports Hall of Fame in 2015. Even though Hoolahan has stepped down from his role at the Sugar Bowl, he guided the New Orleans Host Committee’s successful bid in becoming the host for the 2020 College Football Playoff National Championship being played next Monday.

Under Hoolahan, the Sugar Bowl assumed sponsorship of the FWAA/Eddie Robinson Coach of the Year Award beginning with the 2014 season, the first year of the College Football Playoff when the championship game was held in Arlington, Texas, in January 2015. Thereafter the Sugar Bowl, the Eddie Robinson family and the FWAA have held very successful receptions in Glendale Ariz., Tampa, Fla., Atlanta, Ga., and San Jose, Caliuf., leading into New Orleans this season. The FWAA has named a Coach of the Year since 1957.

“The FWAA recognizes Hoolahan for a job well done in bestowing its Lifetime Achievement Award on a person who has provided excellent leadership at one of the top bowls in college football before his retirement last summer,” FWAA Executive Director Steve Richardson said.

“During Hoolahan’s regime as executive director-CEO, the FWAA successfully held its annual meeting at the Sugar Bowl several times in the national title rotation of the BCS and Alliance structures,” Richardson said. “Furthermore, under Hoolahan’s direction, the Sugar Bowl took over as the presenting sponsor of the FWAA’s Eddie Robinson Coach of the Year Award in 2014 and continues to be the sponsor of the ECOY Award to this day.”