Coach O to be honored on Jan. 11 in New Orleans

DALLAS — LSU coach Ed Orgeron has been named the 2019 Allstate Sugar Bowl Eddie Robinson Coach of the Year after the Tigers registered a perfect 13-0 regular season, won their 12th Southeastern Conference title, and earned the No. 1 ranking in the College Football Playoff.

Selected by the Football Writers Association of America, Orgeron will be honored on the evening of Saturday, Jan. 11, during a reception in New Orleans, two days before his Tigers could be playing for the CFB Playoff National Championship at the Mercedes-Benz Superdome. He is the first Eddie Robinson Award recipient to appear in the six years of the College Football Playoff. 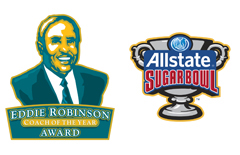 The 58-year-old Orgeron will be receiving the iconic bust of another Louisiana native, the late Robinson, a College Football Hall of Fame coach at Grambling State University for 55 years and winner of 408 career games. Orgeron is from Larose in south Louisiana. Robinson was born in Jackson, in the northern part of the state, but later attended high school in Baton Rouge.

“Coach Orgeron is an incredibly deserving winner of this prestigious honor,” 2019 FWAA President Matt Fortuna said. “From the ways he has reinvented his program on and off the field, to the bonds he has formed with his players, it is easy to see how he has led LSU to a No. 1 ranking this season. (LSU quarterback) Joe Burrow’s Heisman speech alone made me want to run through a brick wall for Coach O.”

Riding a 14-game winning streak, LSU has registered 13 victories in a season for only the second time and will meet No. 4 Oklahoma on Dec. 28 in the Chick-fil-A Peach Bowl in Atlanta in one of two national semifinal games. A win in Atlanta sends LSU to the title game in New Orleans.

This truly has been a magical season for LSU.

“I’m very proud of our football team. In the spring I could see them coming together,” Orgeron said following LSU’s 37-10 victory over Georgia in the SEC Championship. “They were starting in their first season with the spread offense and having Joe (Burrow) run it, then having (passing game coordinator) Joe Brady here and to see the evolution of the spread offense, which our fans have been wanting for a long time. We’re finally gelling on defense that last couple of games. There was a lot of pride on the defense, I knew they were going to play their best ball. It’s just a good time at LSU, and everybody is pulling the same side of the rope.”

The 2019 Tigers’ offense is the only unit in SEC history to include a 4,000-yard passer, a 1,000-yard rusher and two 1,000-yard receivers in the same season. Burrow, the SEC’s Offensive Player of the Year, has broken league records for passing yards and touchdowns; and his completion percentage and passing efficiency ratings are on pace to break NCAA records.

“Coach Ed Orgeron and the LSU Tigers’ impressive 13-0 regular season record is a testament to Coach O’s relentless leadership and guidance of one of college football’s most storied programs,” said Eddie Robinson III, grandson of the legendary coach. “Congratulations Coach Orgeron from the Robinson Family on winning the 2019 ‘Eddie’!”

Orgeron becomes the third LSU coach to collect the FWAA Coach of the Year Award. Paul Dietzel claimed it in 1958, a year in which the Tigers won the national title and beat Clemson in the Sugar Bowl at the old Tulane Stadium. The other LSU wining coach was current Alabama coach Nick Saban, who led the Tigers to the national title in 2003, when LSU beat Oklahoma, 21-14 in the Bowl Championship Series, in the Sugar Bowl at the Superdome.

Orgeron is now one of four different Southeastern Conference coaches to win the FWAA honor since Robinson became the namesake in 1997, the year the legendary coach retired from coaching. The others were Tennessee’s Phillip Fulmer in 1998; Saban in 2003 at LSU and again in ’08 at Alabama; and Gus Malzahn at Auburn in 2013.

Orgeron, a defensive line coach by trade, started his college playing career at LSU but transferred to Northwestern (La.) State after his first year in Baton Rouge. He later was an assistant coach on national championship staffs at Miami (Fla.) and USC. He became head coach at Ole Miss in 2005 but lasted only three seasons before he was fired after a 3-9 season in 2007.

Eventually, he wound up back at USC in 2010, where he stayed though the 2013 season. Orgeron served as interim head coach most of that season after head coach Lane Kiffin was fired. When he didn’t get that job fulltime, he took an assistant’s job at LSU in 2015 and eventually became head coach in 2016 after Les Miles’ tenure ended there.

Along the way as head coach at LSU, one of Orgeron’s coaching moves was to accept Ohio State transfer quarterback Joe Burrow, who has become LSU’s second Heisman Trophy winner. Billy Cannon claimed the Heisman Trophy in 1959, the year after LSU won its first national title.

“I think at the end of the day you got to be a good fit,” Clemson coach Dabo Swinney said of Orgeron. “He certainly was a great fit for LSU. He’s put a good staff together. He’s provided great leadership and stability. But I think more importantly belief. He’s brought some passion into that program, not that they didn’t have it before, but I just think it’s been fun to watch.”

The FWAA has presented a coaching award since the 1957 season when Ohio State’s Woody Hayes was named the first recipient. Beginning in 1997, the FWAA Coach of the Year Award has been named in honor of the late Robinson, a coaching legend at Grambling State University for 55 seasons.

Robinson, who passed away in 2007, won 70.7 percent of his games during his illustrious career. Robinson’s teams won or tied for 17 Southwestern Athletic Conference (SWAC) championships after joining the league in 1959. His Tigers won nine Black College Football Championships during his career spent all at the same school.

The Eddie Robinson Award is a member of the National College Football Awards Association (NCFAA), which encompasses college football’s most prestigious awards. Founded in 1997, the NCFAA and its 25 awards now boast over 800 recipients, dating to 1935. Visit ncfaa.org to learn more about our story.

The Allstate Sugar Bowl has established itself as one of the premier college football bowl games, having hosted 28 national champions, 93 Hall of Fame players, 50 Hall of Fame coaches and 18 Heisman Trophy winners in its 85-year history. The 86th Allstate Sugar Bowl Football Classic, featuring the Baylor Bears from the Big 12 and the Georgia Bulldogs from the SEC, will be played on January 1, 2020. In addition to football, the Sugar Bowl Committee annually invests over $1.6 million into the community through the hosting and sponsorship of sporting events, scholarships and clinics. Through these efforts, the organization supports and honors nearly 100,000 student-athletes each year and has injected over $2.5 billion into the local economy over the last decade. For more information, visit AllstateSugarBowl.org.