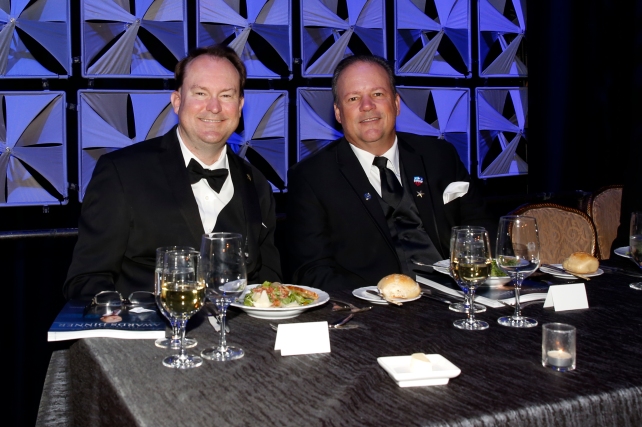 Mark Anderson (left) sits on the dais at the National Football Foundation Dinner on Dec. 6 in New York. FWAA member Ed Grom of the American Sports Network is seated beside Mark. (Photo Courtesy of the NFF)

Can’t believe my term as FWAA President is about to end, but I knew it was over when I lost Pennsylvania.

So, I promise a smooth transition to David Jones, who covers Penn State for the Harrisburg Patriot-News and will become the 2017 FWAA President on Jan. 9 in Tampa, Fla.

If I have one piece of advice to pass along to David, it’s to try to change the seating arrangement for the National Football Foundation Dinner in New York. I was in camera view the entire night, which sounds good, but believe me, it’s the worst thing because you’re aware that people are watching. All night. And it didn’t help that my bowtie was a little askew. Not that anyone noticed, except the UNLV football SID, who posted a photo on Facebook.

But that was a fabulous trip and an honor to be there, representing the FWAA in a room full of dignitaries that included two-time Heisman Trophy winner Archie Griffin, who sat just across the aisle from me.

It also was a thrill to present the Bronko Nagurski Trophy the previous night in Charlotte, N.C., to Alabama’s Jonathan Allen. He was truly touched to receive the award, and I enjoyed spending time with those who were honored. I even told Michigan’s Jabrill Peppers that the Wolverines stopped Ohio State on fourth down in overtime. He didn’t argue, of course.

So now it’s time to look ahead, and there are some key events in Tampa before I hand the reins to David.

We will present the Eddie Robinson Coach of the Year Award to Colorado’s Mike MacIntyre, who did a phenomenal job in turning around a program that had nearly reached bottom. He has some experience in that regard, winning 10 games one season at San Jose State, which is even tougher than winning in Boulder.

Then, at our FWAA Awards Breakfast the morning of the national championship game between Alabama and Clemson, we will honor the late Steve Ellis, the former Florida State beat writer for the Tallahassee Democrat, by permanently attaching his name to the FWAA Beat Writer of the Year Award.

I worked with Steve in Tallahassee, where I saw his great work ethic firsthand. It is most fitting the first presentation in Steve’s name is taking place in Florida and Steve’s alma mater, Clemson, is in the title game. Steve’s widow, Karen, will drive down from Tallahassee to present the award to Jason Kersey for his work covering Oklahoma for The Oklahoman during the 2015 season.

So I wish David Jones all the best as he takes over, though I wish I had asked for that recount in Pennsylvania.