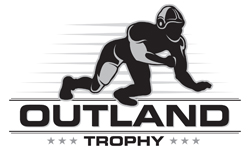 In the four other sweeps, it was the same player. Alabama defensive end Jonathan Allen claimed the FWAA’s Bronko Nagurski Trophy on Monday night in Charlotte. 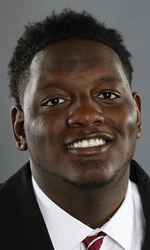 Robinson, a 6-6, 310-pound junior from Monroe, La., is the top offensive tackle on the No. 1-ranked team in college football. He has started every game at left tackle since he has been on campus (42 straight games). He had 28 knockdown blocks in the regular season. He has been selected a six-time offensive player of the week by the Alabama coaching staff. He played a great game in the 10-0 victory at LSU, with no sacks allowed and no penalties. He has blocked for 10 100-yard rushers this season. In the 30-12 victory over Auburn in the Iron Bowl, Robinson graded out at 89 percent and did not allow a quarterback hurry or sack. He cleared a path for 203 rushing yards in that game.

“He certainly is a dominant offensive lineman on the college scene and should have a great future in the NFL,” said Steve Richardson, FWAA Executive Director. “He follows in a long line of outstanding linemen for the Tide. He is the third under Nick Saban since (2008) to win the Ourland Trophy. Alabama runs the ball with authority against just about everybody, and Robinson is a big reason why.”

Alabama ties Ohio State and Iowa with Outland winners at four – the third highest total by one school. Alabama didn’t have a winner until 1999, but now has Robinson, Chris Samuels (1999), Andre Smith (2008) and Barrett Jones (2011). Nebraska leads all schools with eight different Outland Trophy winners (nine total), followed by Oklahoma with five then Alabama, Ohio State and Iowa with four each.

The Outland Trophy, which is named after the late John Outland, an All-America lineman at the University of Pennsylvania in the late 1800s, is the third oldest player award in major college football behind the Heisman Trophy and Maxwell Award. It has been awarded to the best interior lineman in college football on offense or defense since 1946 when Notre Dame’s George Connor was named the recipient.

For the 20th consecutive year, the presentation of the Outland Trophy will occur in Omaha, on Jan. 11, 2017, at a banquet sponsored by the Greater Omaha Sports Committee. At the same banquet, Oklahoma offensive lineman Greg Roberts, will receive an Outland Trophy. Roberts was the 1978 winner of the award before trophies were handed out by the FWAA. His Oklahoma coach, the legendary Barry Switzer, will receive the third annual Tom Osborne Legacy Award during the evening.

The Outland Trophy is a member of the National College Football Awards Association (NCFAA). The NCFAA encompasses the most prestigious awards in college football. The 22 awards boast more 700 years of tradition-selection excellence. Visit ncfaa.org to learn more about our story.

The Football Writers Association of America, a non-profit organization founded in 1941, consists of more than 1,300 men and women who cover college football. The membership includes journalists, broadcasters and publicists, as well as key executives in all the areas that involve the game. The FWAA works to govern areas that include game-day operations, major awards and its annual All-America team. For more information about the FWAA and its award programs, contact Steve Richardson at tiger@fwaa.com or call 214-870-6516.