Jack Bogaczyk on the Cam Henderson Center floor with one of his three NSSA West Virginia Sports Writer of the Year awards.

Editor’s note: Longtime FWAA member Jack Bogaczyk retired June 30. Bogaczyk, a four-time FWAA writing award winner who worked the last four years as a web columnist and magazine editor for Marshall University Athletics, was a former sports columnist in Roanoke, Va., and Charleston, W.Va., (where he was also sports editor), as well as a sportswriter at newspapers in Binghamton, N.Y., and Covington, Ky. Bogaczyk and his wife, Carol, are relocating to Florence, Ky.

The following is a portion of his final column.

This is my last column for HerdZone.com and HerdInsider.com. As some readers are aware, I am retiring from the sportswriting profession into which I made a somewhat accidental entrance nearly 50 years ago, and today (June 30) is my last day of work. My wife, Carol, and I will be moving soon to northern Kentucky, which is “home” for us because we grew up there in the shadow of Cincinnati … but haven’t lived there in nearly 44 years of marriage.

In four-plus years with Marshall Athletics and Herd Insider, I have written more than 1,100 stories – this one is No. 1,103, to be exact. In my years behind the keyboard, I’ve seen a lot of big games, been a lot of great places and witnessed plenty of compelling moments … not to mention seen a lot of changes, like working behind a computer monitor rather than with typewriter and paper, or ending a story with a -30-.

Marshall Coach Doc Holliday and the Herd football team showed their appreciation to Jack Bogaczyk for his coverage on a rainy April Saturday to cap 2016 spring practice.

I’ve also had the opportunity to mentor more than a few younger writers and publicists who have gone on to love the craft as much as I do. Helping our profession with such encouragement has been important to me and will remain so when I have the opportunity.

But what I liked most about what I was doing – then and now – is that it was different every day. Sports stories are a lot like fingerprints. Every game is different. Every story is different. Rarely is a situation you deal with quite the same as the day or week or year before.

It’s often live, taking place only yards in front of you, and there are times when you’re sweating like the participants – like when you have 20 minutes until deadline and you need to file a 650-word, no-quotes column on an NCAA Tournament title game that’s just ending.

But to me, what sports writing and sports public relations are mostly about is people. It’s about making a connection. When you’re writing a story and quoting someone, it’s about he or she letting you into their thoughts and/or their lives, and trusting you to tell their story … and whether good or bad, to get it right. 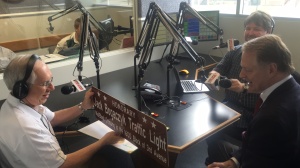 Huntington (W.Va.) Mayor Steve Williams (center) presents Jack Bogaczyk (left) with signage denoting that a traffic light on Third Avenue – adjacent to the Marshall University campus – was named in Bogaczyk’s honor on June 22, 2016. At right is Paul Swann, host of First Sentry Bank Sportsline on Huntington’s WRVC, where Bogaczyk was a Wednesday regular.

I have never forgotten that. I always tried to fulfill that responsibility. Yes, it’s good to be first with a story. But it’s great to be accurate. It’s paramount. The reader and the subject are counting on you. It’s OK to be tough, as long as you’re fair.

And in the good ol’ days when print was king, you couldn’t take it back. These days, you can take an online version down. Once a story was on the page, however, you couldn’t hit the “delete” key.

Most days over the years, I haven’t looked upon what I do as a job. It was a calling that turned into a passion. What I wrote about seemed to intrigue people, and so I tried to deliver something intriguing to them.

A lot of people deserve thanks, but the ones at the top of the list are you – the readers. Without readers, we’re nowhere.