(Ed. Note: Mark Anderson of the Las Vegas Review-Journal became the FWAA’s 2016 President in early January in Scottsdale, Ariz. Below is speech that he gave accepting the position during the FWAA Awards Breakfast at the media hotel. Mark, who covered UNLV football for a number of years, has moved to the basketball beat but will still report football periodically during the fall while serving as the FWAA President.) 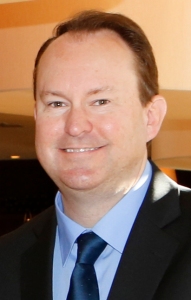 “Thank you all for this incredible honor. I am humbled to be so warmly welcomed by you not only the past few days, but the past two years after Tiger put me on the board. I remember how surprised I was at his invitation to eventually rise to president. Not only did I cover a team that wasn’t from a power conference, but I covered arguably the worst program in that league. Kirk Bohls (2014 FWAA President) later enlightened me on the importance of having diverse representation. Little did Tiger know, however, that I’m an SEC grad (from the University of Florida).

“This is a big day in many ways. It’s also my 17th anniversary at the Las Vegas Review-Journal, and this has been a time for milestones. My wife and I each turned 50 in the fall, and our son — I mean, our straight-A student son — entered middle school. My paper was sold — twice. You might have heard about the second purchase. My 15th wedding anniversary is later this year.

“One of my colleagues, Ed Graney, takes over as President next year of the United States Basketball Writers Association. Another co-worker, Steve Carp, is a former USBWA President. To say I am proud of where I work would be an understatement.

“I’m honored to become the second Tallahassean to become President of the FWAA. The other one, Bill McGrotha (1990 FWAA President), was the long-time columnist of the Tallahassee Democrat, and I not only worked with Bill, I was his driver for Florida State football games. You knew you were walking with a celebrity when going through the Doak Campbell Stadium parking lot with Bill. He was almost as popular as Bobby Bowden.

“We all are a reflection of our upbringing, and I want to take a moment to talk about two great influences on my life and career.

“My dad is 96, and the past few months have been difficult with him going in and out of hospitals. But he’s the same fighter who survived pneumonia at the age of 12 or 13 after a doctor said he wouldn’t make it through the night. My dad also watched his parents lose all their savings in the Depression, and he never was able to get a college degree he so badly wanted. But my dad went on to become one of the world’s top civil engineers, overseeing the construction of dams all over the globe and giving my family the opportunity to experience so many cultures that most Americans miss out on.

“But the main influence on my career was my mom. She and I had season tickets for years to Florida State games before I later came to my senses and went to Florida. If the Seminoles happened to pull off a big victory, my mom would go downtown and buy the state papers. If she liked a particular passage — Hubert Mizell of the St. Petersburg Times was a particular favorite — she would read it aloud. I sometimes hear her voice when I write.

“We all know how important it is to have an understanding family with our crazy deadlines and constant travel, and I certainly have a wife and son who love and support me. Without them, it would be much more difficult to live out this crazy dream of writing about sports for a living.

“Thank you again for this privilege. I am excited about the challenges over the next year and about the opportunity to represent this great organization. You will get nothing but my best.”