The following is the 16th installment of the Pillars of the FWAA series. Dave Campbell was the 1988 winner of the Bert McGrane Award. Thanks to FWAA member Gene Duffey for writing and researching this sketch.

For a guy who worked 51 years in the newspaper business, Dave Campbell will be remembered longer, at least in his own state, for starting a magazine. Campbell founded Texas Football in 1960 and more than a half a century later the magazine is still going strong. 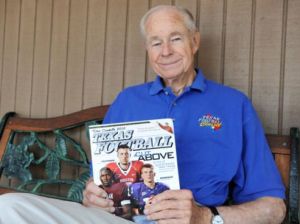 In the summer of 1959 Campbell, who was already sports editor of Waco Tribune-Herald, picked up several college football annuals at a local newsstand.

“I was struck by how many errors there were,” Campbell said of the magazines. “I was covering the Southwest Conference and it was pretty abbreviated coverage. One magazine left Baylor out entirely, and that was my alma mater.”

Football was extremely popular in Texas, particularly high school football. Campbell figured he could certainly do a better job covering the college teams in his state than the other magazines.

With the help of Tribune-Herald staffers Al Ward, Jim Montgomery and Hollis Biddle, Campbell got down to business. They started by mailing out questionnaires to the high school coaches in the state. They visited all the coaches in the Southwest Conference after spring practice.

“I never worked harder in my life,” said Campbell. “(The magazine) had a great reception. It was an artistic success, but not a financial one.”

Campbell sold the magazine to Host Communications in 1985, but has continued to work as editor-in-chief for the last 30 years under different ownership groups. Texas Football excels in its border-to-border coverage of the state’s high school and college football teams. Circulation passed 100,000 several years ago.

“I was very pleased the way it worked out and happy to still be a part of it,” he said.

Campbell, born in Waco, was the son of a double amputee who ran a gas station from a wheelchair in the county. He died when Dave was only 7.

Campbell graduated from La Vega High School one Friday and started work the following Monday as a copy boy at the Tribune-Herald. He enrolled at Baylor that September at 17. The following summer he was drafted.

He served with the 14th Armored Division in France and Germany, the unit landing in Marseilles and fighting its way up the Rhine River into Bavaria. Campbell received the Bronze Star. “A lot of people did a lot more than I did,” he said.

After the war, Campbell returned to Baylor and graduated in December 1946. Already working full time at the newspaper on the news desk, he soon became night news editor.

Baylor’s football program was starting to prosper and the paper’s editor, Frank Baldwin, believed the Bears deserved more coverage. Campbell moved across the newsroom to become assistant sports editor. When Henry “Jinx” Tucker, believed to be the first writer in the state to start making predictions on high school football games, died in 1953, Campbell was named sports editor. He stayed in the job for 40 years.

“It was a good job, and there were a lot of people (at the paper), and I enjoyed their company,” said Campbell, who wrote five columns a week.

There were opportunities in bigger cities. The Dallas Morning News offered him a columnist job. He also talked with the Houston Post.

“But by then I had started Texas Football,” he said. “The paper gave me time to do it. I was so immersed in (the magazine).”

Campbell retired from the newspaper business in 1993, but not from writing. He worked an additional 15 years, heading up Baylor Insider for the school’s athletic department.

He watched the landscape of newspapers and colleges change completely, particularly the demise of the Southwest Conference. Four of the conference’s eight members bolted for the Big 12.

Campbell covered the glory days of the old conference, winning an award for his story on the 1969 Texas-Arkansas game that helped determine the national championship. He couldn’t help but enjoy seeing Baylor beat Texas in 1974 and earn its first berth in the Cotton Bowl.

The media center at now vacant Floyd Casey Stadium was named for Campbell in 1999.

He also played a role in helping Waco attract the Texas Sports Hall of Fame.  In 1990, Campbell had been inducted into the Hall. But the museum had been floundering in Grand Prairie, near Dallas, kept open only by the grace of Lamar Hunt’s money.

Campbell met with Waco city manager David Smith, who proposed to the city council pledging $1 million to bring the hall to Waco, where it has flourished.