The following is the 12th installment of the Pillars of the FWAA series. Edwin Pope was the 2001 winner of the Bert McGrane Award. Thanks to FWAA member Gene Duffey for writing and researching this sketch.

It seemed like a logical endeavor to 11-year-old Edwin Pope. Listening to the 1940 Orange Bowl game between Georgia Tech and Missouri, Pope decided to type every word that Ted Husing said on the radio, commercials included.

Pope had learned to type in first grade when he hung around his father’s cotton warehouse, practicing on a used typewriter that his father had bought for $10. “I don’t know where the $10 came from,” said Pope. “Those were tough times in the cotton business.” 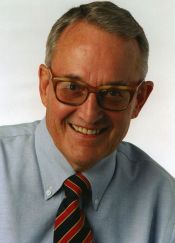 The day after the game, Pope rode his bicycle to the Athens Banner-Herald and proudly delivered his typed out report. In those days newspapers often ran long stories of football games that amounted to little more than play-by-play accounts.

The people in the newsroom passed young Pope along from one person to another until he finally met the editor.

“This is not a running story,” the editor told Edwin. “This is a radio account. We can’t use this. But I want to get a little information on you.”

Instead of printing Pope’s story in the paper the next day, the paper ran a story about Pope. For more than half a century later that framed story hung on Pope’s wall.

The young boy had squeezed his foot through the door and into the newspaper business. The editor asked him to cover stories at the YMCA.

“We can’t offer you any money, but you’ll learn a lot,” said Pope. “He was right on both accounts.”

By age 15 he was earning $3 a week and by his senior year of high school was covering the University of Georgia.

“At that age you could work 16 hours a day and not feel it,” he said. “I’d come in at 6 a.m. to lay out the sports section, then go to school at 8:30, then go cover something after school. Back then (the athletes) were a lot easier to get along with than they are now.”

Pope enrolled at Georgia while continuing to cover the Bulldogs for the paper. He even served as sports information director when the regular SID went off to fight in World War II. “I was doing something you couldn’t do today,” he said. “It would be an unforgivable conflict of interest.”

Pope later added the job of telegraph editor at the Banner-Herald. His first day with that responsibility was June 6, 1944: D-Day.

He left Athens in 1948 to work for United Press International in Atlanta, eventually becoming Southern sports editor of the wire service. Furman Bisher hired him as assistant sports editor at the Atlanta Constitution. He switched to the Atlanta Journal as sports editor in 1954.

A penny pinching editor prompted the most important move of Pope’s life.

“We didn’t have a pencil sharpener in the sports department,” he said. “I asked the managing editor if I could buy a $1.95 pencil sharpener. He wrote a big ‘No’ on the requisition. I thought he was joking. He said, ‘That’s why I’m here, to keep down the extravagance.’ ”

Pope picked up the phone and called Bob Elliott, a friend and sports editor of the Miami Herald. He asked Elliott if he could use a new man in Miami. When Elliott found out that Pope meant himself, Elliott told him he could start the next day if he wanted.

“I was working the desk, too,” he said. “It was a great life. I’d cover a big race at Hialeah, write a column about it and come in and work the desk.”

Pope covered the first 47 Super Bowls, before he missed Super Bowl XLVIII. “I wouldn’t say I’m proud, I’m lucky,” said Pope. “There were a lot of guys who missed the first one because their bosses didn’t think it was worth covering.

“I was so fortunate to work for the Miami Herald. They treated me like a member of the family. I don’t ever remember a day when I didn’t want to go to work, whether it was covering a game or going into the office.”

Pope has written five books, including “Football’s Greatest Coaches,” which in 1955 meant the greatest college coaches such as John Heisman, Bobby Dodd, Dana X Bible and Bernie Bierman. The well-connected Pope knew where TV variety show host Ed Sullivan lived in New York. Pope called him and asked him to plug the book on his show, which Sullivan did.

“College football was different then,” said Pope, who later wrote about five national championship teams at Miami. “You could get a lot closer to the people. Coaches would fall all over themselves to help you out. It’s a lost world. I never met a college football game I didn’t like. I’ve seen a lot of pro games that bored me.”

Pope is one of sports journalism’s most honored figures over seven decades. In 1989, he was the winner of the Red Smith Award, which is one of the most cherished accolades in his field. He is a member of the National Sportscasters Hall of Fame as well as the Florida Sports Hall of Fame.  He also is a multiple winner of the National Headliners Club award as the nation’s best columnist. Pope has claimed multiple Eclipse Awards for excellence in horse racing coverage and was once named one of Esquire magazine’s 10 “Super Scribes.” In 2010, the main press box at Sun Life Stadium (home of the Miami Dolphins and Miami Hurricanes) was named after him.

Some of his most valuable possessions are letters from Ernest Hemingway, who could catch Pope’s columns in the Herald.  The contents of the letter suggested Pope was the best sports writer in America. For a couple of generations a lot of people in south Florida would agree.