Webster defines pre-eminent as: excelling above all others.

Serving the UGA Athletics Association for more than 30 years, the legendary Felton is generally regarded by knowledgeable observers as the standard by which collegiate sports information directors are measured. 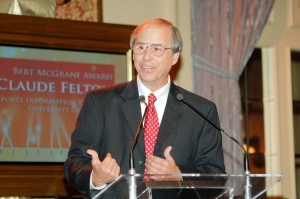 Aptly aided by a staff of full-time, part-time and student assistants, Felton’s primary responsibility is to chronicle and disseminate information about the UGA intercollegiate sports teams and student-athletes to media on local, state, regional, and national levels as well as Bulldogs fans and all others who request it.   He is the consummate professional — well-organized, thorough at handling details and performing his job with an objective approach.  Felton is quick to deflect any credit for his efforts while devoting his attention to getting out information about the Bulldogs’ newsworthy deeds.

Felton’s career has spanned the glory days of UGA Athletics.  He has directed the overall publicity operation for thirty-plus national championship teams, including the school’s fifth national football championship, as well as numerous individual national champions. During his tenure, UGA Athletics highlights have also included the greatest play in Bulldogs Football history (the Buck Belue-to-Lindsay Scott 93-yard miracle touchdown pass that helped push UGA past hated Florida, 26-21 in 1980 and propelled the Bulldogs to the national title), running back Herschel Walker winning the 1982 Heisman Trophy and the men’s basketball team making its only appearance in the NCAA Tournament’s Final Four (1982-83 season).

Felton enthusiastically recalls the exploits of UGA’s top coaches like Vince Dooley, Hugh Durham and Jack Bauerle as well as the exploits of the best athletes to play for the Bulldogs such as Walker, Belue, Terry Hoage, Kevin Butler, David Pollack, Todd Gurley, Aaron Murray, Dominique Wilkins and Katrina McClain.  Equally special to Felton are the athletes whose names don’t evoke as much fanfare as the star performers, but who nevertheless make meaningful contributions to their respective UGA teams.  Felton also realizes the importance of devoting proper attention to all UGA sports — not just the glamorous ones like football and basketball — and he makes sure UGA women’s sports receive equal attention to the men sports.

Bulldog Illustrated Sports Editor and long-time UGA Sports radio announcer Jeff Dantzler declared of Felton:  “Claude is a wonderful man who epitomizes everything that is right and great about the University of Georgia.  There will never be another (Sports Communications Director) like Claude.  He is a treasure to all Georgia people.”

A Savannah, Ga., native, Felton enrolled at UGA in 1967 and earned Associate Bachelor’s (1970) and Master of Arts (1971) degrees from the Henry Grady School of Journalism.

Felton was a summer intern sports reporter and later briefly a news reporter for the Savannah Morning News (1971).  He then worked two tenures in various posts at Georgia Southern College, including Director of Information Services, Sports Information Director, Associate Director of Institutional Development, and Director of Public Relations.  Additionally, he was an assistant tennis coach at the school from 1972 to ’75.

Felton also was assistant sports information director at UGA and in ’79 he became its Sports Information Director, a capacity in which he has served since.

He has witnessed the most significant changes in the sports information business — especially the explosion of sports on television to the growth of media covering college athletics to the Internet’s role in them.  As a result, Felton has upgraded many services provided by the UGA Sports Communications (formerly Sports Information) Department and he and his staff have been honored with dozens of national and regional awards from the College Sports Information Directors of America for the slick media guides, game programs and related publications they produce.

Another example of the astute work of Felton and his staff is provided by the Football Writers Association of America in its “Super 11” listings of the top eleven sports information departments in the NCAA Football Bowl Subdivision.  Georgia is the only school that has received “Super 11” recognition every year (five) since its inception in 2009.  Selection criteria includes:  how efficiently press boxes/operations are operated; quality and timeliness of information provided; amount of information presented and how appropriately it is updated on web sites; personal responsiveness to media inquiries as well as the accessibility of players and coaches; and how well the sports information departments go the “extra mile” in servicing the media.

No one who deals with college sports information departments should be surprised that UGA has accomplished such a prestigious feat and that is largely because of Felton’s leadership.

Felton has served as media coordinator for numerous NCAA national championship events held at UGA and was the host sports information director for the 1977 NCAA Final Four basketball tournament in Atlanta. He was also a member of press liaison staffs for various Olympic Games, including in 1984 in Los Angeles and as press venue chief for soccer at the ’96 Centennial Olympic Games held at UGA. Additionally, Felton was chairman of the Ethics Committee of the College Sports Information Directors of America (CoSIDA) from 1985 to ’91 and chairman of the organization’s Olympic Liaison Committee (1992-95).  He has also served as a member of the NCAA Men’s Basketball Final Four media coordination committee since 1995.

Felton’s contributions to UGA and Bulldogs Sports are so numerous that it’s a general consensus among his peers and colleagues as well as others familiar with his work that UGA should name a facility for him or honor him with a comparable milestone.

“Claude is exemplary in the sports publicity field,” said McGarity, a former Assistant Sports Information Director to Felton in the late 1970’s-early ’80’s. “Claude has an impeccable reputation nationwide among his peers and journalists who are aware of his hard work, dedication to UGA and talent for his job. Claude always conducts himself in a first-class manner and represents UGA with the highest degree of proficiency.”

Dooley, UGA’s head football coach from 1964 to ’88 and also athletics director from 1981 to 2004, added the following glowing remarks about Felton:  “Claude was the first and most important administrative hire I made, and he has proven to be a tremendous asset for the University of Georgia. I have often told Claude that I recruited him as hard to direct our sports publicity program as I did Herschel Walker to play for us.  It can’t be over-stressed that Claude is the very best in his line of work and there’s an overwhelming consensus of the same by those who’ve professionally dealt with him.”

Felton achieved the pinnacle accomplishment of his professional career on July 4, 2001, when he was inducted into the College Sports Information Directors of America Hall of Fame, acknowledging his exemplary work at UGA and showcasing the high esteem in which he is held by his colleagues.  He also received the CoSIDA’s next most prestigious honor in 2004 — the Arch Ward Award — presented annually to an individual who has made an outstanding contribution to the college sports information field.

Additionally, Felton was the 2008 recipient of the Football Writers Association of America’s Bert McGrane Award, which is presented to an FWAA member who has performed great service to the organization and the writing profession and is symbolic of the association’s Hall of Fame. It is named for the Des Moines, Iowa, writer who was executive secretary of the FWAA from the early 1940s until 1973.

Felton was also inducted into the Savannah, GA Athletics Hall of Fame in 2005.      Karlene Lawrence, who has served under Felton’s direction in various roles including as his secretary and Manager of Internet Operations and Publications Coordinator for the UGA Athletics Association, noted that Felton possesses a talent for and a deep dedication to his job that are rare in his profession.  Lawrence commented:   “I’ve worked with Claude for more than a quarter-century and he is one of the most sincere, honest and ethical persons I’ve ever known.  It’s been a tremendous honor to work for, and learn from someone of Claude’s caliber.  He has been most instrumental in our sports communications department being so respected nationwide.  Very few colleges or universities, regardless of size, have someone who has been as extensively involved in the athletics program as Claude has at Georgia.”

Veteran college football coach and former UGA Associate Athletics Director Dick Bestwick echoed Lawrence’s sentiments about Felton with these statements: “It was my good fortune to work with a number of outstanding people in my 48-year athletics career and I never worked with anyone more outstanding in his or her job than Claude.  He brings out the best in the people surrounding him.  I feel enriched by being associated with Claude.”

Truly, Felton is a Southern gentleman whose class, humbleness and congenial personality endear him to those with whom he comes in contact.  He’s also a great family man.  Felton is married to the former Cathy Turner of Athens.  She is an administrative assistant in UGA’s Crop and Soil Sciences College.  Claude and Cathy have three children symbolic of the association’s Hall of Fame that — Robyn, Christopher and Patrick.  Robyn is a 2000 Samford University graduate who currently is a vice-president for the Colonnade Group in Birmingham, Ala.  Christopher, a 2001 UGA graduate, was a former administrative intern to Dooley and certified athletics trainer for the Bulldogs. He attended medical school in Miami and Fort Lauderdale, Fla., and currently is fulfilling his medical residency at New Hanover Regional Medical Center in Wilmington, N.C.  Patrick, a 2010 UGA graduate, recently completed an internship at the Allstate Sugar Bowl office in New Orleans, La.  Claude and Cathy have one grandchild — Carter Christopher Felton — born to Christopher and his wife, the former Katie MacKelcan, in August 2011.

What Claude Felton has accomplished for UGA has, indeed, been of colossal and even historic proportions.  And the university has never employed a more loyal servant or a better person.