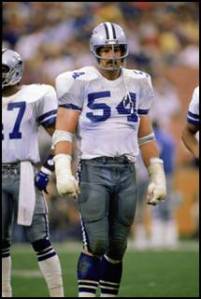 CHARLOTTE, N.C.  – The Charlotte Touchdown Club, in conjunction with the Football Writers Association of America and Florida East Coast Railway, proudly announces that Randy White will be the recipient of the 2014 Bronko Nagurski Legends Award, which recognizes outstanding defensive football players from the past 40 years.

The award will be presented formally to White during the annual Bronko Nagurski Trophy Awards Banquet on Monday, December  8 at The Westin Hotel.  University of Alabama head coach Nick Saban will be the keynote speaker.

For Reservations or Information on how to become a member of the Club’s Sponsor Team, please call 704-347-2918 or email John Rocco atjrocco@touchdownclub.com.