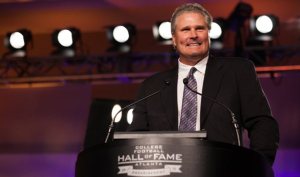 Steve Bartkowski, the All-American quarterback from the University of California and a hometown hero in Atlanta, responded for the class.

From the National Football Foundation

Atlanta rolled out the red carpet tonight for the 2013 College Football Hall of Fame Enshrinement Class on Aug. 28. A sold-out crowd of 900 college football fans and dignitaries packed the Grand Ballroom of the Omni Hotel at CNN Center for a first-class celebration that honored 24 of the game’s greatest legends.

“Great buildings are meant to inspire, and there is no doubt that the new facility being built here in Atlanta will inspire for generations to come,” said NFF President & CEO Steve Hatchell. “This year’s class recognizes some of the finest players and coaches ever inducted into the Hall, and it is fitting that they take their place in history as the first class to be enshrined in Atlanta.”

Hosted by the Atlanta Hall Management and the Atlanta Sports Council, in partnership with the National Football Foundation (NFF), the event marked the first time that Atlanta presided over the Enshrinement Ceremony. The celebration took place steps from the construction site for the new 94,256-square-foot home for the Hall, which will open in the fall of 2014 in the heart of Atlanta’s sports, tourism and entertainment district surrounding Centennial Olympic Park.

“When our team began work on this celebration early this year, we had no idea how many folks would want to come to a Hall of Fame celebration before there was a Hall facility,” said College Football hall of Fame President & CEO John Stephenson. “What a great start and a great indicator of the support that Atlanta and all college football fans will have for our facility. “

Award-winning broadcaster Wes Durham emceed the event, engaging each member of the enshrinement class during a question and answer session that produced many powerful memories. Coach James “Boots” Donnelly (Austin Peay State, Middle Tennessee State) produced one of the larger contingents of fans in the room with more than 90 friends and family making the trip to see him accept college football’s ultimate honor.

“My fondest memories are of the players and assistant coaches and all of the supporters,” said Donnelly. “That’s what’s special for me. It’s not the wins and losses. It’s the relationships with the players and coaches.”

Steve Bartkowski, the All-American quarterback from the University of California and a hometown hero in Atlanta, responded for the class, echoing the same sentiments as Donnelly and  the rest of the class.

“None of us played the game of college football thinking that we would be in the College Football Hall of Fame,” said Bartkowski. “It’s the icing on the cake. None of us could have done it on our own, so to our teammates, we say thanks… It’s an incredible honor and we are humbled by it.” 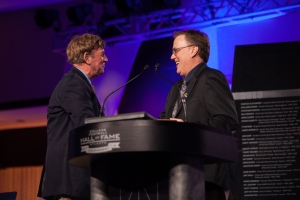 Atlanta continued the enshrinement tradition of lending the Hall’s national stage for the presentation of the Bert McGrane Award, which the Football Writers Association of America awards to an individual who has performed great service to the organization and/or the writing profession. Dick Weiss, the influential and long-time sports writer with The New York Daily News, accepted the award this year.

“I am really humbled to be on the same program as so many great players and coaches,” said Weiss. “On Saturdays, there is nothing better than covering college football… I have been blessed to cover 32 national championship games.”

In addition to the enshrinement ceremonies, the event featured a enlightening preview of the 2013 college football season by a panel of top television analysts, including Tony Barnhart, Desmond Howard (a 2010 inductee into the College Football Hall of Fame), Mark Schlabach and Matt Stinchcomb (the 1998 recipient of the NFF William V. Campbell Trophy).

Check out more photos of the event by visiting http://www.cfbhall.com/media/