Comment by the judge: “The sweat and blood – and pain – dripped off this story. It could have been written in a weight room. Great development of a profile on legendary strength coach Dave Redding.”

BUSH ISLAND, Neb. — Sitting before you is the end of political correctness.

On more than one occasion, Dave Redding asks if you want a drink. Never mind that it is early afternoon. Behind the 64-year-old lounging in his favorite chair is a cardboard cut-out of John Wayne.

The Duke almost seems to be looking over the shoulder of a man who reflects his American hero ethic. Everything here on the wide open Great Plains seems to be bigger, broader, more profane.

“If I don’t take any of these pills,” Redding says. “I wouldn’t be able to do any of this shit.”

In other words, to simply live as normally as possible.

An in-progress wood carving of Lakota warrior Crazy Horse graces his land. Before the day is out, Redding will pull out a Super Bowl ring, a Big Eight conference championship ring, a gold-plated Winchester rifle.

Colorful stories from a career in strength and conditioning are sprinkled with F-bombs. In a quiet moment, the ultimate man’s man curses his fortune.

“I’d do anything,” Redding says quietly, “to have my health.”

But he doesn’t and that sucks. What Dave Redding does have is Parkinson’s Disease. It’s obvious now. The chronic, degenerative neurological disorder is characterized by muscle tremors.

Doctors will say you don’t necessarily die from Parkinson’s. But as symptoms worsen, it can cause choking and falls that lead to death.

Redding has chosen to live with his affliction in quiet dignity out here on the banks of the Platte River.

You need to know Dave Redding and his plight at this moment. For more than three decades, he was a college and NFL strength coach. More than that, he helped invent and refine the profession that is a staple of the modern game.

If you follow or play football, you probably either know him or know of him; if not, shame on you, because you should.

Now retired, the former Nebraska defensive end was the first strength coach at Washington State (1977), Missouri (1978) and for the Cleveland Browns (1982).

For nine teams, the man both sculpted All-Pros and counseled college kids about their deepest fears. The NFL’s strength coach of the year in 2006 is a USA Strength and Conditioning hall of famer.

“You’re the only one on the staff that handles every player every day,” Redding explained. “Even trainers don’t do that. You have to be mother, father, best friend, worst enemy and the fine line between kicking them in the ass and patting them on the back.”

All in the name of bigger, stronger, faster, better.

“He was a wild one,” said Boyd Epley, Nebraska’s assistant athletic director in charge of strength and conditioning. “He wasn’t a choir boy, but he was a lot of fun to be around. Very loyal, very good guy.”

The cabin Redding and his dad built could be a man cave showroom. It’s also so isolated Epley and a couple of buddies got lost trying to find it.

Redding dug the well himself. He and 19 other neighbors own 2,000 acres on what is an actual island in the middle of the Platte.

There are deer, coyotes, bald eagles, turkey, ducks and pheasant. If the reason for his retirement wasn’t so sad, the beauty would make you swear Robert Redford and Brad Pitt were around somewhere in a scene for “A River Runs Through It.”

Redding gets around with the help of crutches — converted Louisville Slugger baseball bats. He even drives. His speech is quiet, sometimes slow, but always convicted.

“It’s hard to be seen like this [going] from cock of the walk,” Redding laments, “from Silverback [gorilla] to cripple.”

Two nephews drop by on a regular basis to check on the  legend nicknamed “Red Man.” Not many other folks call these days.

Around 10 on a regular basis, Redding said. Green Bay Packers star quarterback Aaron Rodgers is one of them.

Redding says he’s probably had the affliction for 20 years. He was diagnosed in 2004. In 2009, he joined the Packers. Three years later, in 2011, Redding had enough service time to get NFL bridge insurance and was lucky enough to get that Super Bowl ring.

It’s clear there is still more resolve than pity sitting in that comfy chair under John Wayne’s gaze.

“Aaron Rodgers, the first time I saw him, I said, ‘When are you going to drop another nut and lead this team? It’s your team. You gotta start manning up,'” Redding said.

“Dave is my best friend in the world …,” Lovat said. “Dave is real. He would probably be more proud at his building of men than his building of muscles. That sums it up, I would say. Someone paid him that compliment at one time. That’s one of the things he was most proud of.”

Lewis was a raw intern in 2004 when he saw Redding take over a Chargers’ team that included Drew Brees. The season before, Redding and wide receiver David Boston were involved in what ESPN called “a run-in.”

“Him and I got in a fight,” Redding said flatly. “He wanted to sue me and all that shit.”

Redding’s dad is said to have brought weight training techniques back from Europe during World War II.

“This was our dinner table,” Redding said from the kitchen of the cabin. “My dad built this table. Devaney used to be sitting here with all the Nebraska coaches. I was just a kid.

“My mom used to call the state patrol on my dad when Devaney came to town. Devaney used to run the streets with my old man.”

Those emerging strength techniques were refined at Nebraska where Redding was a one-eyed defensive end who played under Devaney, Tom Osborne and Epley, who became the nation’s first paid strength coach in 1969.

“Born without sight in my right eye,” Redding said. “I was a sucker for left hook.”

There apparently have been a few of those. Redding admitted to training punches with pro players he has trained.

But he was always been one to live up to that guy code. One former player sprinted across the field after a game to kiss him. Redding had adhered to the code, refusing to tell the head coach the player had clocked him.

“He never would have had a job in the NFL again had I told,” Redding said. Never mind that “I couldn’t breathe, I couldn’t shit, I couldn’t laugh,” because of the pain.

It’s worth asking how Redding would fit into the modern NFL, since he helped shape it.

“I don’t like it,” Redding said. “They keep bitching. They make all these goddamn rules about head shots. You put a weapon on my head. A sophisticated f—– like that, it’s only natural.

“Take your helmet off and see who wants to play football. Take their facemask off.”

Redding points to the top of a stairwell. Hanging there is the leather helmet he played in at North Platte High.

You’ll never see this on a strength coach resume: In 1967, Crump was involved as a community leader luring a Broncos-Raiders AFL exhibition game to North Platte.

Little Dave was punched in the face by a fan trying to retrieve a ball in the stands. That simple act essentially led him to the big time.

The Broncos receivers coach at the time was Sam Rutigliano. Out of instinct, Redding gravitated to the coach’s side on the sideline for safety’s sake.

“Do you remember that little boy hanging onto your pant leg that day in North Platte?” Redding asked Rutigliano. “That was me.”

Rutigliano cancelled all his interviews and had his strength coach. During his time with the Browns, Redding became not only a witness to The Fumble and The Drive, he was a participant.

Redding became responsible for signaling in plays from the defensive coaches in the box. He claims to have a tape reflecting the complete confusion on the sidelines and in the defensive booth as John Elway worked the Broncos downfield in the 1987 AFC Championship Game.

“People don’t know it, but I’ve still got it in my safe. I’ll sell it to HBO one of these days,” Redding said.

At Missouri, Redding coached hall of famer Kellen Winslow. The quarterback on those teams, Phil Bradley, played in the MLB.

Back then, he was making $3,500 as a glorified position coach without a strength coach title. The philosophy: “Slap it on a wall, see if it sticks. Go like hell.”

You have to understand the politics and power in a weight room.

“You smell them, in every way, when they come in fresh,” Lovat said. “You smell their burps, their farts, their sweat. You get to know them at a raw level. They’re being stressed at a physical way. They kind of reveal themselves to you.”

Redding said he once threatened to walk if former Kansas City linebacker Derrick Thomas was paid a $250,000 offseason participation bonus. Thomas had missed it by one day.

At that time, Thomas owned the town, the team and hearts of Chiefs fans. He didn’t get his bonus.

“What do you mean you’re going to kick my 52-year-old ass?” he once told one would-be weight room challenger. “I’ve got nothing to lose. You’ve got everything to lose. Let’s go have a beer.”

Bones have literally been broken in those conflicts. But a broken rib Redding is nursing at the moment came from a fall.

That’s what Parkinson’s can do you, too.

Redding sadly reflects on comedian Robin Williams, who committed suicide two years ago after being diagnosed with Parkinson’s.

Redding proudly points to the portraits of his brothers, Bobby and Dan, who he says both died at the age of 37 from AIDS.

Both left the Midwest for Hollywood. Bobby designed album covers and liner notes for the likes of Chicago and Barbara Streisand.

Redding has saved some of their work. It is spectacular.

At the end of this visit, Redding reflects on a life well-lived. Crazy Horse overcame long odds, too. The Indian hero beat Custer at the Battle of Little Big Horn.

This is also the 140th anniversary of Crazy Horse’s surrender and death at the hands of the U.S. military six hours from here in Fort Robinson.

Redding sits at that table his father built and produces that vial of pills he takes to get through the day.

At this moment, who cares about political correctness? 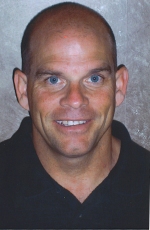 Background: Four decades in the biz have taught me there are no absolutes — except for the Cardinals and Blues. As a native St. Louisan, it is absolutely imperative the Cardinals get to the World Series each year and the Blues win the Stanley Cup — once. I’m going on 50 years and counting as a fan.  Cardinal fan, but a lifer (living in Kanas City).  After stints at the Kansas City Star, St. Louis Sun, The National and Omaha World-Herald, I became an on-line guy in 1998 with CBS SportsLine (now CBSSports.com). This was at a time when some schools questioned whether I/we were supposed to be credentialed. Things got better. In 2018, I celebrated 20 years with the company. I live in a house divided if they ever resurrect the Missouri-Kansas rivalry. My daughter graduated from Missouri and my son is on his way to a journalism degree at Kansas.  On my winning entry: For years, I wanted to write a story on Dave Redding, who is a legendary figure in strength training. When I heard he had Parkinson’s and was living alone, I called to see if I could come see him. About 80 miles west of Lincoln, there he was in a two-story cabin on an island in the Platte River outside Marquette, Nebraska. I have checked on him every few months since I wrote to story. “Red Man” would be pleased his story has resonated.