MIAMI LAKES, FL. — Arkansas State coach Blake Anderson is the winner of the 2019 Capital One Orange Bowl-FWAA Courage Award. Anderson coached the Red Wolves to a 7-5 record this fall following the death of his wife, Wendy, who passed away this summer after a two-year battle with breast cancer. 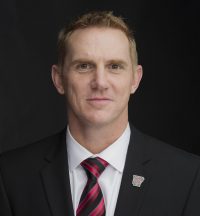 “The past two years have been the most difficult time our family has ever faced, especially these last few months since Wendy’s passing,” Anderson said. “I can only say that even in the midst of heartache, we have always felt the strength of Christ, the support of our coaching staff, players and administration, as well as the love of so many amazing people across the country lifting us up each step along the way. I pray that God will continue to use our journey in big ways to honor Him and the legacy of Wendy’s heart for God and others.”

In the spring of 2017, Wendy Anderson was diagnosed with triple-negative breast cancer. The cancer was located in a spot where doctors could not operate. Wendy underwent a natural treatment approach, then had surgery late that summer. She was declared cancer-free on Aug. 31, 2017.

In the fall of 2018, the cancer returned at Stage 4, and her condition worsened in the ensuing months. In January, she had surgery to relieve the pressure of five large masses in her brain. She underwent radiation and chemotherapy, and she became oxygen-dependent 24 hours a day.

Blake and Wendy Anderson had three children together. Blake took a leave of absence from Arkansas State just before Wendy died on Aug. 19, at the age of 49. Assistant head coach and defensive coordinator David Duggan served as the Red Wolves’ interim head coach until Anderson’s return on Sept. 7.

“Coach Anderson has been the epitome of courage in the face of unimaginable adversity throughout these past two years,” 2019 FWAA President Matt Fortuna said. “The way that he cared for Wendy and

their children, and the example that he has continued set for both his players and the college community at-large, transcends sports.”

Anderson’s first game back on the sideline was a 43-17 win at UNLV in Week 2. The following week at Georgia, during Anderson’s second game back, thousands of Bulldogs fans wore pink in honor of Wendy.

“I know that there are so many inspiring stories of courage and perseverance that we see and hear each day, which is why I would like to express how completely honored and grateful I am to receive this award on behalf of myself, my family and the memory of my beautiful wife Wendy,” Anderson said.

Arkansas State has won two conference titles under the 50-year-old Anderson. The program went 5-3 in league play this season, good for second in the West division, one year after winning the division title. Sixteen different Red Wolves players earned all-conference recognition this year.

Arkansas State will play Florida International this Saturday in the Camelia Bowl in Montgomery, Ala., marking a school-record ninth straight bowl appearance, which is the third-longest streak among Group of 5 programs.

“I think it’s an honor that the Orange Bowl recognizes the courage the Anderson family has shown while facing the challenges they’ve endured over the last couple of years,” Arkansas State athletic director Terry Mohajir said. “Blake is a great man with unwavering faith. The tremendous amount of love and care he demonstrated for his wife Wendy, while also running his football program, was quite a beautiful and moving sight. The example he has provided by his courage, love and communication to all has been quite an inspiration.”

The Courage Award was first presented by the Football Writers Association of America (FWAA) in 2002. A select group of writers from the FWAA vote on the winner each year. The requirements for nomination include displaying courage on or off the field, including overcoming an injury or physical handicap, preventing a disaster or living through hardship. The winner of the award will be included in festivities during Capital One Orange Bowl week and receive his trophy at an on-field presentation.