CLEMSON, S.C. — Dabo Swinney was having flashbacks during the Clemson spring football game on Saturday with former Alabama and Seattle Seahawks star Shaun Alexander in attendance.

The 2005 NFL MVP was at the Tigers’ spring game to hand off the inaugural Shaun Alexander/FWAA Freshman of the Year Award to Trevor Lawrence. The trophy is presented by Stand Together, a non-profit organization.

Swinney had some fun at Alexander’s expense when his dynamic tailback, Travis Etienne, bounced a run outside to the head coach’s displeasure.

“You don’t have to hit home runs Shaun!” Swinney yelled in Etienne’s direction with Alexander standing beside him. “Sometimes you have to hit singles!”

Alexander broke into a grin, knowing the phrase all too well having heard it several times early in his career at Alabama.

Swinney’s coaching career was just lifting off as a graduate assistant under the direction of College Football Hall of Famer Gene Stallings when Alexander signed with the Tide out of Boone County High School in Florence, Ky., and redshirted the 1995 season.

The 1996 season was big for Alexander and Swinney, a coming out party of sorts for both. Swinney was promoted to receivers coach under the direction of then-Tide offensive coordinator Woody McCorvey, who is now Clemson’s associate athletic director for football administration.

Alexander, meanwhile, was competing for playing time in a crowded backfield when he sent shockwaves across the country on Nov. 9, 1996.

Coming off the bench in the second quarter, Alexander took 20 handoffs from then-Alabama QB and now-Cleveland Browns head coach Freddie Kitchens and gained a school-record 291 yards against LSU, scoring four touchdowns in a 26-0 win over the Bayou Bengals.

Gerry DiNardo, the LSU coach at the time, since turned Big Ten Network lead analyst, remembers recognizing Alexander’s greatness when he watch No. 37 slice through a defense that anchored a 10-2 team.

“I can still remember a play starting toward our bench and then him cutting back, and I remember thinking as I watched that this is a special back,” DiNardo said. “He hadn’t started any games, and we didn’t know much about him.

“Anytime you see a great athlete move forward and contribute to our society, it’s a great story, so what started out for me as a bad memory has turned into a very good thing.”

McCorvey knew he had a pretty good thing in Alexander, but not even he could have anticipated that sort of performance.

“For him to do what he did down in the other Death Valley at LSU in Baton Rouge, 291 yards rushing, that was unbelievable,” said McCorvey, who after seeing Alexander score on his only carry of the first half called Alexander’s number 19 more times in the second half.

“That was just the start of it for Shaun, he was able to finish of a tremendous college career and went on to have a stellar NFL career.”

As much as Alexander excelled on the field, he was an exemplary student-athlete off of it, serving as an Alabama chapter Fellowship of Christian Athletes president in 1999, the same year he was named SEC Player of the Year.

Those good works continued off the field, as Alexander started a family foundation in Seattle to mentor young men before his nine-year NFL career and retirement to the Washington, D.C., area with his wife and nine children.

“Shaun was a great representative of Alabama football, the way he carried himself off the field, and of course what an incredible back he was,” said ESPN analyst Kirk Herbstreit, who launched his career on ESPN GameDay in 1996. “I love that the FWAA has come up with an award recognizing a freshman of the year, and how fitting to be able to have a guy like Trevor Lawrence win it in the first year.

“Shaun and Trevor are two great people, two great athletes, and I think we’ll look back at this with Trevor winning a trophy that’s fitting of him and everything he and Shaun represent.”

In addition to the Alexander Trophy, the FWAA Freshman of the Year will receive a gold coin with the following traits displayed on the coin: “Ambassador, Legend, Faith, Passion, Talent, Focus, Character, Leader.”

McCorvey, who mentored Swinney as a receiver and assistant coach and now helps oversee Clemson football, has used many of those same words during his distinguished coaching career. 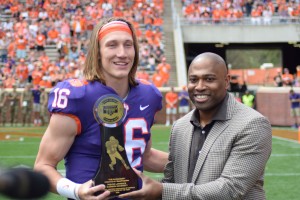 “Both Shaun and Trevor exemplify class,” McCorvey said. “When I was a part of Shaun’s career at Alabama, his work ethic and everything he put into being a student-athlete was exemplary.

“It’s the same thing with Trevor since he has been here. He’s been all business, he’s carried himself in the right way, and when he got his opportunity last year he handled it well. For him to win this award and win the national championship, that’s what it’s all about.”

Swinney, his arm around Alexander much of the day, agreed.

“Here’s the cool thing, I was there when you were a freshman, and I am here to see you present this award to this great freshman, Trevor,” Swinney told Alexander. “It’s fitting that he’s the first one, you were an amazing freshman; obviously he was too.

“But the great thing is both of you are great people, both of you have strong faiths. I’m honored Trevor won it and you are here to present it.”
Lawrence, born on Oct. 6, 1999, four days after Alexander scored four touchdowns and tallied 200 total yards in a 40-39 road win over a No. 3-ranked Florida team, was humbled to win the award.

“It’s awesome, obviously Shaun was a great player, so to win his award is an honor,” Lawrence said. “I try to lead by example; you can’t ask anyone to do anything that you’re not willing to do.

“My faith plays a big part in leading people, too, and that’s also leading by example. That’s doing the right thing, not just with the team and in workouts, but off the field, too.”

Alexander, his Alabama rooting interests aside, made it clear he’ll be pulling for Lawrence to continue his greatness on and off the field.

“I wanted someone to win this award whose character and faith and talent matched, and Trevor was that guy,” said Alexander, who chose Lawrence for the award before the Clemson phenom completed 20-of-32 passes for 347 yards and three touchdowns in the Tigers’ 44-16 CFP Championship Game win over the Tide.

“I, along with Stand Together and the Football Writers Association of America, will be looking for big things from you in the future on and off the field.”

Clemson players and coaches come down the ramp into the stadium for the school’s 2019 spring game. Photo by Shane Sandefur.

Former Alabama and NFL running back Shaun Alexander, namesake of the Shaun Alexander/FWAA Freshman of the Year Award, signs autographs along the sideline at Clemson’s 2019 spring game. He was there to honor the award’s inaugural recipient, Clemson quarterback Trevor Lawrence. Photo by Shane Sandefur.

Clemson quarterback Trevor Lawrence, the first winner of the Shaun Alexander/FWAA Freshman of the Year Award, drops back to pass in Clemson’s 2019 spring game. Alexander honored Lawrence with the trophy at the game. Photo by Mike Griffith.

FWAA board member Mike Griffith interviews Clemson quarterback Trevor Lawrence, the first winner of the Shaun Alexander/FWAA Freshman of the Year Award as Alexander, a former Alabama and NFL running back and the namesake of the award, looks on. Photo by Shane Sandefur.

Former Alabama and NFL running back Shaun Alexander is greeted by Clemson coach Dabo Swinney at the school’s 2019 spring game. Alexander was there to formally present the first Shaun Alexander/FWAA Freshman of the Year Trophy to Clemson quarterback Trevor Lawrence. Photo by Shane Sandefur.
Join 803 other followers