Tomlinson, a 6-3, 330-pound senior from Chicago (Lane Tech), has started 51 consecutive games and has helped the Blue Devils (9-3) score 390 points this season, the third-most in program history. Duke’s offensive line leads the country in fewest tackles-for-loss per game allowed with just 3.33 and has surrendered just 13.0 sacks, tied for the 13th fewest in the nation. 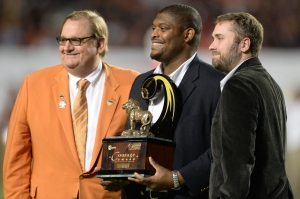 But Tomlinson just making a college roster and winding up in Durham was a challenge. Duke’s current football captain offers a slightly different version of the “The Blind Side,” the famous story of Michael Oher, who came from a broken family in Memphis, lived in numerous foster homes, and eventually became a star offensive tackle at Ole Miss and went on to the NFL.

“I am both grateful and humbled to be honored by the Football Writers Association of America and the Orange Bowl with this award,” said Tomlinson, who will finish his Duke career against Arizona State in the Hyundai Sun Bowl on Dec. 27. “My mother has been the greatest influence on my life, and none of this recognition would be possible without her sacrifice, love and support.

“It means the world to me to make her proud. If not for her, I could still be in Jamaica, living a life of poverty. Every time I go home or have an opportunity to talk to my mother, she always tells me before she hangs up, ‘Laken, I love you and I’m extremely proud of you and everything that you do for our family. Keep doing what you are doing. The Lord has a plan for you, Laken.'”

END_OF_DOCUMENT_TOKEN_TO_BE_REPLACED

ATLANTA – Beginning in 2015, each year’s college football stars will be honored at the home of the game’s greatest legends as The Home Depot College Football Awards will move to the College Football Hall of Fame and Chick-fil-A Fan Experience in downtown Atlanta as part of a new multi-year agreement between ESPN and the Hall of Fame.  Airing live on ESPN on December 10, 2015, The Home Depot College Football Awards will feature the presentation of nine of the most prestigious accolades in college football and pay tribute to the remarkable successes of each year’s standout student-athletes both on and off the field.  The 45-yard-long indoor football field at the new 94,000-square-foot attraction doubles as a fully-functioning event facility and will serve as the show’s new home.

“Disney gave us a wonderful home for The Home Depot College Football Awards for more than two decades. Now, the National Football Foundation and the College Football Hall of Fame will provide us the opportunity to enhance both our coverage and the experience for attendees and fans. The show and this new venue are not only a natural fit, but a great way to mark 25 years of ESPN televising the awards,” said Burke Magnus, ESPN senior vice president, programming and acquisitions.

“The Home Depot College Football Awards celebrates exceptional student-athletes, and there’s no more fitting venue for this prestigious ceremony than at our spectacular new facility, which celebrates college football every day,” said John Stephenson, president & CEO of the College Football Hall of Fame.  “The Hall of Fame was designed, built and wired for premier broadcast events like this, and we will honor this decision to move the show by providing exceptional hospitality and a celebratory experience to the players, their families, coaches and fans.”

END_OF_DOCUMENT_TOKEN_TO_BE_REPLACED

“I’d like to thank the Football Writers Association of America,” said Patterson, the winningest football coach in TCU history (131-45). “I’m very honored and humbled to be a part of such a great award and the man it represents.”

Patterson’s 2014 TCU team, after being picked to finish seventh by the media before the season, claimed a share of the Big 12 Conference football title in only its third season in the league. Rebounding from a 4-8 record in the 2013 season, the Horned Frogs (11-1 overall, 8-1 in the Big 12) finished sixth in the final College Football Playoff rankings. TCU will meet No. 9 Ole Miss in the Chick-fil-A Peach Bowl on Dec. 31 in Atlanta.

The Eddie Robinson Coach of the Year Award will be highlighted during a reception at the Renaissance Hotel on Jan. 10, 2015, in Dallas, where Patterson will accept the Eddie Robinson bust at the College Football Playoff National Championship Game media hotel. He will place it alongside the bust he won five seasons ago.

Patterson, in his 14th season as the Horned Frogs’ head coach, also claimed the Eddie Robinson Award in 2009 when TCU won a Mountain West Conference championship, played in the Fiesta Bowl and finished with a 12-1 record and No. 6 ranking. Patterson was also a finalist for the award in 2003 and 2010. Previous to Patterson, the last Big 12 coach to win the award was Oklahoma State’s Mike Gundy in 2011.

END_OF_DOCUMENT_TOKEN_TO_BE_REPLACED

Scenes from the Outland Trophy presentation and the College Football Awards Show at the Atlantic Dance Hall on the Boardwalk at Walt Disney World. 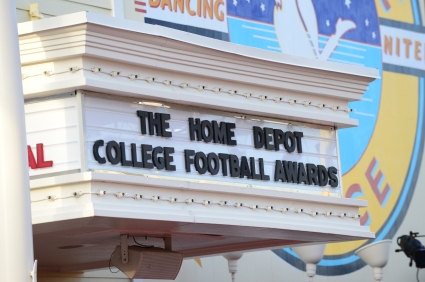 Outland Winner Brandon Scherff of Iowa being interviewed before he won the award in Orlando.

Brandon Scherff being interviewed by Rece Davis on stage at the Dance Hall.

Brandon Scherff of Iowa and Malcom Brown of Texas being interviewed on the Red Carpet Show. Brown was an Outland finalist. 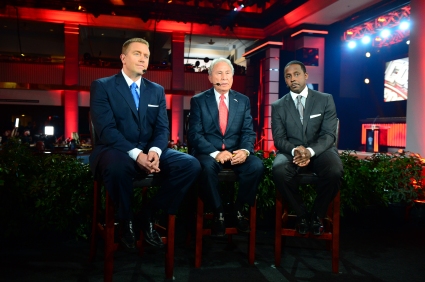 The “College GameDay” crew of Kirk Herbstreit, Lee Corso and Desmond Howard on set at Disney for the Awards Show. 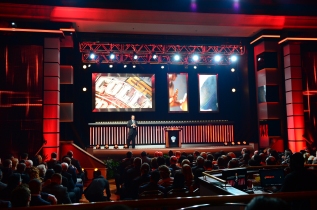 The set at the Atlantic Dance Hall at Disney. 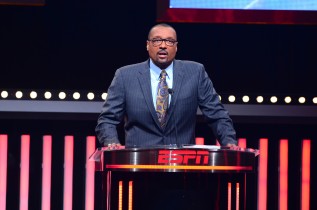 ESPN’s Mark May, the 1980 Outland Trophy winner from Pitt, announcing the 2014 winner. 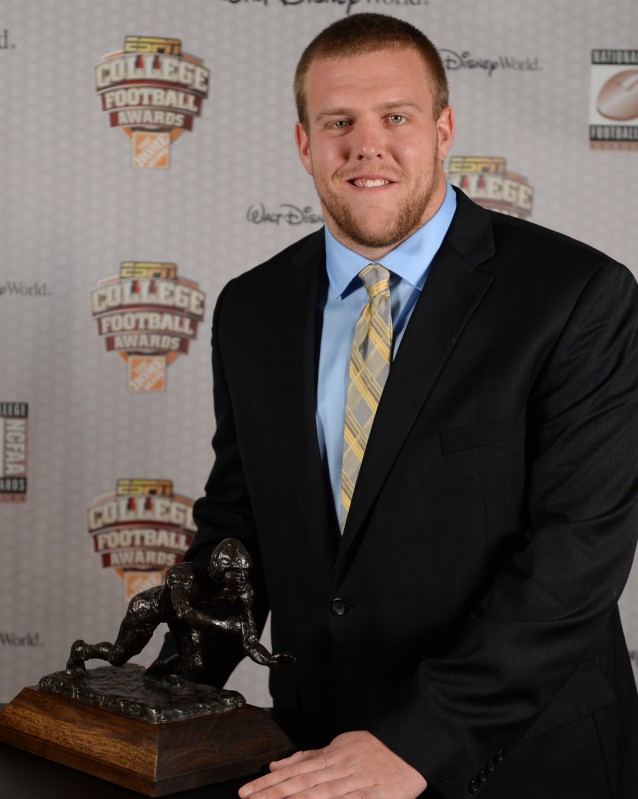 Brandon Scherff of Iowa with his 2014 Outland Trophy.

Also in the audience at the Dance Hall were Auburn center Russ Dismukes and Texas defensive tackle Malcom Brown, the other two 2014 Outland finalists. Former Pittsburgh offensive lineman and ESPN college football analyst Mark May, the 1980 Outland Trophy winner, made the on-stage presentation to Scherff, the fourth offensive tackle in the last five years to win the award.

Going into Iowa’s Taxslayer Bowl game against Tennessee on Jan. 2, Scherff has started 25 straight games for the Hawkeyes. In all he has played in 43 games and started 35 of them. He has been a strong leader in all four seasons that he has played in Iowa City. Iowa, 7-5, ranks 68th in scoring offense (28.3 ppg) and 66th in total offense (398.3 ypg). At left tackle, he has been rock solid this season for the Hawkeyes who have traditionally produced good offensive linemen.

END_OF_DOCUMENT_TOKEN_TO_BE_REPLACED

(Note:  Randy White was honored at the same banquet where Arizona linebacker Scooby Wright III was revealed as college football’s best defensive player as deemed by the Football Writers Association of America.)

CHARLOTTE, N.C. — Randy White never expected to be honored as a legend in college football.

Of course, the highly decorated defensive star for Maryland and then the Dallas Cowboys never really expected to even play college football in the first place.

He’d been a star pitcher and first baseman for his high school team in Wilmington, Delaware, and had been told at one time that the Philadelphia Phillies wanted to draft him and sign him for a $30,000 bonus.

“I thought, ‘I’m rich,’” White recalled Monday before the Charlotte Touchdown Club Banquet where he was recognized as a Bronko Nagurski Legend from the FWAA’s 1974 All-America Team. “But my dad told the scout no. He said I was going to Maryland and play college football.”

END_OF_DOCUMENT_TOKEN_TO_BE_REPLACED 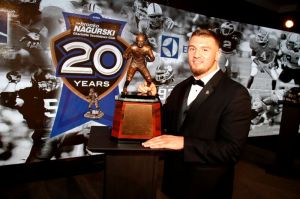 Wright, a 6-1, 246-pound sophomore, accepted the award at the event that has been sponsored by the Charlotte Touchdown Club for 20 consecutive years. He becomes the second Arizona player to win the award after the inaugural winner Rob Waldrop in 1993 and the first Pac-12 player to claim it since Terrell Suggs of Arizona State in 2002. Wright is just the second sophomore to win the award, joining Ohio State linebacker James Laurinaitis, the 2006 winner.

Wright has gone from a player recruited by only a few schools – a two-star recruit on the West Coast – to a tackling machine at Arizona (10-3), ranked 10th in the final College Football Playoff rankings.

“I say thank you all to my teammates and coaches,” Wright said. “Football is a team game. I accept this on behalf of the Arizona football program.”

END_OF_DOCUMENT_TOKEN_TO_BE_REPLACED

FWAA member Jackson Michael has a new book, The Game Before the Money: Voices of the Men Who Built the NFL.

The book contains interviews with 40 football legends from the 1930s to the 1970s, including Bart Starr, Don Maynard, Ken Houston and Frank Gifford. They discuss their college and football careers, and much college football history is covered. 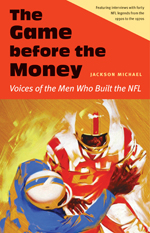 Jackson will have a book signing with Elvin Bethea and Garland Boyette on Dec. 11 at the Barnes and Noble store at the First Colony Mall in Houston.

FWAA members can contact Rosemary Vestal of the University of Nebraska Press at rvestal2@unl.edu.

Members also can contact Michael directly at bigtexasthriller@yahoo.com or michaeljacksontx@outlook.com. 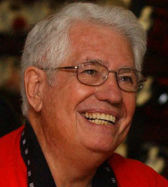 Bryant, the 1998 winner of the FWAA’s Bert McGrane Award, was sports editor of The Lincoln Star from 1954 until Nebraska athletic director and football coach Bob Devaney hired Bryant as sports information director in 1962.  Later Bryant served as associated athletic director from 1976 until he retired in 1997.

Click here to read the entire story by Ken Hambleton of the Lincoln Journal Star.