Like a Capistrano swallow, Art Spander always finds his way to the Rose Bowl

Art Spander failed to attend the first Rose Bowl in 1902 only because, as the story goes, he hit the snooze alarm (a rooster) and missed the 7 a.m. stagecoach to Pasadena.

Or maybe that story is apocryphal.

Consider that, astonishingly, for a second.

People make a big deal about Joe DiMaggio’s hitting streak of 56-straight games. Shoot, that streak only spanned ONE season.

In a long, distinguished and frenetic career, Spander has covered 46 straight Masters and 36 straight Super Bowls. He has also attended every Cal-Stanford game since 1968.

He is most proud, though, of his connectivity with the Rose Bowl. He will receive the FWAA Lifetime Achievement Award for the streak at the association’s award breakfast on Jan. 6 in Newport Beach, California.

“I just think sitting there is the greatest thing in world,” Spander says. “Watching the sun start to set about 4 o’clock, and the shadows falling, with the game going on. It’s a great place to be.”

Art Spander sold programs at his first Rose Bowl in 1954.

Spander sold programs at his first Rose Bowl in 1954 and has not missed a game since.

His love affair started as kid growing up in Los Angeles and has lasted longer than some bridges and most marriages.

“I’m so old I saw Cal play in a Rose Bowl,” the 75-year-old Spander said in reference to the Bears’ last appearance in 1959.

Some people thought it was a bad idea when the West Coast, in 1947, entered into a binding contract with the Big Ten.

“The LA Times was outraged Army wasn’t going,” Spander recalls. “They did not want Illinois.”

It really looked like a bad idea when the Big Ten won 12 of the first 13 games, yet the series eventually leveled out and the relationship has flourished–even through the dreaded BCS era.

It was never Spander’s intention to never miss a game.

His father, who owned a grocery store in Highland Park, one year suggested Art could make a few bucks selling Rose Bowl programs.

So, in 1954, at age 15, dressed in a white shirt and armed with his Social Security card, Spander sold programs during Michigan State’s 28-20 win over UCLA.

Spander sold programs for three years, including the 1955 rain game in which Ohio State coach Woody Hayes blasted the USC band for marching on the field at halftime.

“The first few years they still had wooden goal posts,” Spander says. “Everyone would rush the field and break down the goal posts. I’ve still got pieces of goal posts.”

Spander’s Rose Bowl streak continued as a student at UCLA and has stayed alive during more than five decades as one of the nation’s most respected sportswriters.

One remarkable aspect of the streak is how few times it has actually been threatened.

You would have thought an early stint in the Army would break the chain, but Spander timed his 1961 duty so that he would be released from basic training in July. He served out the rest of his term in the reserves.

As a cub reporter for United Press International in the early 1960s, Spander got stuck on a desk shift on New Year’s Day that threatened the streak.

As kickoff approached, Spander simply sneaked out of the office for what would become a six-hour lunch break. 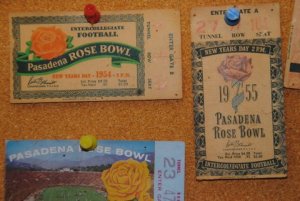 Last year, an ashen-faced Spander showed up for Stanford and Wisconsin after fighting the flu all week, but there was no way was he going to miss his 60th straight Rose Bowl.

Spander has a cabinet filled with press passes from various media outlets that have credentialed him to file stories under the dateline: “PASADENA.”

He has kept the streak alive despite leaving L.A. in 1965 for the San Francisco Chronicle. He’s been in the Bay Area ever since, lending his column expertise to the San Francisco Examiner, Oakland Tribune and dozens of media outlets worldwide.

His Rose Bowl streak has transcended world events and jarring upheaval in the media industry.

He has outlasted the Cold War, cutbacks, layoffs, technology and Father Time.

Spander has filed stories via carrier pigeon, dictation and Western Union, but also via the old Tandy “Trash 80” computer and the modern laptop.

He transitioned from a cigar-smoky press box, filled with the Tommy-gun clattering of typewriters and ringing phones, to today’s library-quiet “tweet” zone in a temperature controlled incubator.

You’d need a week to list all the highlights. Spander ranks the 1966 Rose Bowl as his favorite because it featured his alma mater, UCLA, upsetting Michigan State.

“That was really a landmark game,” Spander says.

He’ll never forget 1963, in which No.1 USC  furiously hold off a late rally by No. 2 Wisconsin, led by quarterback Ron VanderKelen.

People thought fans were leaving early because USC had the game secured.

Actually, Spander said, “the light was terrible. The game went on and on, into the darkness. You could barely see.”

Spander lists high on his list the 2005 season classic between USC and Texas, but he has not been a big fan of the Rose Bowl in the BCS era.

“Nebraska and Miami, that was not a Rose Bowl,” he said of the 2001 season BCS title game. “And now we got the second game. It’s a game, not a Rose Bowl.”

Changing formats, however, won’t keep Spander away. He is credentialed for both games in Pasadena this year but, of course, will only count the Jan. 1 game toward his streak.

He’ll be here next year too, God willing, when the Rose Bowl hosts one of the two semi-final games in the new playoff system.

“I guess the older you become the more you like tradition,” Spander says. “It’s a great tradition. People ask ‘are you going to go?’  Of course you’re going to go. I’m going to go as long as I can.”